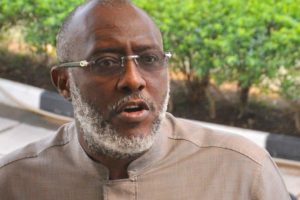 The Federal High Court in Abuja has found former spokesman of the Peoples Democratic Party (PDP), Olisah Metuh and his firm, Destra Investments Limited, guilty of first of the seven counts of fraud and money laundering charges.
Justice Okon Abang ruled today, February 25, that former National Security Adviser, Sambo Dasuki, unlawfully transferred the sum of N400 million to the defendants in November 2014.
Justice Abang said that the defendants should have known that it was an illegal transaction as they had no contract with the NSA’s office.
The Economic and Financial Crimes Commission (EFCC) instituted the charges against them.
Details later…