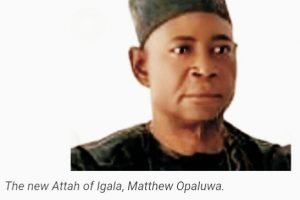 A new Attah Igala (King of Igala kingdom) has been named by the Kogi State Government. He is Matthew Opaluwa Oguche.

The Kogi State Commissioner of Local Government and Chieftaincy Affairs, Barrister Salami Ozigi, announced the appointment of the new Attag Igalah at the end of the State Executive Council meeting, presided over by the State Governor, Yahaya Bello, yesterday, October 18.

The appointment of Opaluwa, according to Ozigi, followed due process.

Opaluwa was born into the family of the late Chief Opaluwa Oguche Akpa.

The prince is the ninth of 16 surviving children and the fourth of the six males of the late Chief Opaluwa Oguche of the Aju Ameacho ruling dynasty of Igala kingdom.

He attended  School of Basic Studies, Ugbokolo, in Benue state, in 1981 and proceeded to Ahmadu Bello University, Zaria in the same year where he obtained  Bachelors of Science (B. Sc.) Degree in Business Administration in 1986.

He returned to the same school for his Masters (MBA) degree in Business Administration in 1997.

Before his appointment, he had worked at Independent National Electoral Commission (INEC) in 1988 as administrative officer and rose through the ranks to become Deputy Director.

He had served in many Local Government Areas of Kogi, Kaduna and Federal Capital Territory as Electoral Officer and in Katsina state, he was in charge of the Research and Documentation Unit of the Electoral body.