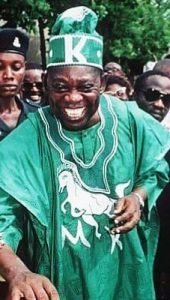 Vice President Yemi Osinbajo has confessed that late Aare Onakakanfo of Yoruba land, Chief Moshood Kashimawo Olawale Abiola (MKO Abiola) won the June 12, 1993 Presidential election, which is why the government of President Muhammadu Buhari has decided to correct the anomalies in that historical epoch.

Professor Osinbajo, who spoke when he received in audience, at the Presidential Villa, Abuja, the Vice President of Venezuela, Aristobulo Isturiz, who is leading his country’s delegation to Nigeria’s Democracy Day celebration tomorrow, June 12, said: “one of the principal issues, politically, was the recognition of that election in 1993 which was won by, now late, Chief MKO Abiola, an important progressive opposition leader.

Vice President Osinbajo stressed that the Buhari administration believes in resolving some of the issues around the annulled June 12 1993 presidential election, adding: “that is why we are celebrating June 12 as our new Democracy Day. So, we are really very happy that you are able to share with us a very special event – the celebration of our new democracy day.”
Professor Osinbajo also received the Vice Premier of North Korea, Ri Ryong Nam.

See also:  FCT Minister Of State, Ramatu, Advises School Children Not To Be Lazy During Lockdown