Home NEWS Osinbajo To Obasanjo: Stop The Rhetoric Of Religion 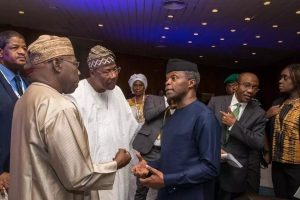 Vice President Yemi Osinbajo has asked former Nigeria’s President, Chief Olusegun Obasanjo and his fellow travelers to stop the religious rhetoric and focus on things that would unite the people of the country.

“So I want to urge all our leaders here that we must not allow the rhetoric of religion to supersede the rhetoric of unity. We must also speak up; we must seek ways that will unite our country.

Professor Osinbajo, who spoke today, Tuesday, when he led Abuja residents on Sallah homage to President Muhammadu Buhari at the Presidential Villa, Abuja, was obviously reacting to Obasanjo’s latest attack on Buhari’s government, which he accused of Islamising the country.

Professor Osinbajo made it clear that God has been extremely good to Nigeria and President Buhari as well as the government, recalling that about two years ago, he had to host the Sallah homage because the President was away on medical leave at the time.

He said that God has been so good, not only did He bring the President back healthier than when he left, but has also been gracious enough for him to have a second opportunity to lead Nigeria.

Osinbajo swore that Nigeria today, is at a threshold of greatness, saying that any situation where something great and important is about to happen, “usually you will have very many and negative opposing voices that want to keep that thing from happening.

“I believe that our country is at a threshold of the breakthrough that we have been praying for and hoping for all these many years. And this is why many challenges are going on. Challenges around security, religion, people who are stoking up ambers  of lagoon, religious grievance and ethnic divisions and all that.”

He noted that the gathering of people of different political and religious colours to greet the President is a proof that the country is a country of one people, adding that they might be different in their faith, ethnicity “but we are one people? We are one and unity people.”

Vice President Osinbajo commended all the leaders present at the event “for making this tradition, that we will come together – Christians, Muslims, and people of different faith to demonstrate that this country is a united country. And that those who will want to stoke up ambers or division we will not allow them to do so.”

Osinbajo also commended President Buhari for the great leadership he had shown in the past four years and in this second term and prayed that may God almighty will help him and strengthen him, give him the grace and understanding and empower him even more to be able to do the things he desires in his heart to do to make Nigeria really great.