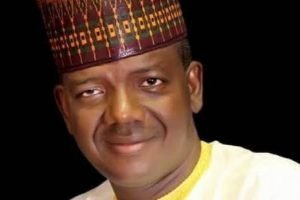 The Peoples Democratic Party (PDP) is still lamenting the defection of Governor Bello Matawalle of Zamfara state to the ruling All Progressives Congress (APC), saying that it isan act of unpardonable betrayal.
This is as the former national chairman of the APC, Comrade Adams declared in Edo State: “it is with great pleasure, relief and deep sense of personal satisfaction that I welcome you to our party, the APC. I have for long looked forward to this day, when you will reunite with the APC, your original party.”
In a statement, the PDP’s spokesman, Kola Ologbondiyan called the governor’s defection an “unpardonable act of betrayal” and said from Matawalle’s statement, it is clear that he joined the ruling party out of intimidation.
“The statement by Governor Matawalle further confirms that the APC has been promoting insecurity, particularly terrorism and kidnapping for ransom, in various parts of the country as a way to create an emergency situation to cover their atrocities, siphon public funds as well as intimidate and coerce state governors elected on the platform of other political parties to join their fold,” the statement reads.
“PDP holds that by this confession, it is therefore clear that Governor Matawalle did not defect to the APC because the Party has any democratic credential as erroneously claimed by the APC national leader, Asiwaju Bola Tinubu, but only surrendered to intimidation and cowardly joined those behind the killings and acts of violence in Nigeria,” the party said.
“Of course, the APC, as a party of political bandits, does not have any democratic credential to attract well-meaning and patriotic Nigerians. Governor Matawalle must however note that joining such individuals, who have brought so much anguish and pain to his people, is an unpardonable act of betrayal which will continue to act as an albatross particularly against the backdrop of his own vows.
“On the reclaiming of the governorship mandate, the PDP described Matawalle’s boast as the feeble kick of a disoriented and confused deserter, stressing that the 1999 Constitution (as amended) is clear on the responsibilities of a deputy governor that finds himself under an absconding governor like Matawalle.”
And in a letter to Zamfara governor, Adams Oshiomhole said that it takes a man of courage, conscience, principles and honour to make a long-awaited move as done by the governor, stressing that not many politicians in this clime would have the audacity to undertake such move from PDP to the APC.
The letter which he personally signed and made available to reporters in Benin by his media aide, Victor Oshioke, Oshiohole, who is former Edo governor, said that Zamfara governor’s defection was with great pleasure.
“I am delighted that your coming to the APC with your legion of supporters is not only a boost for our great party in terms of numbers, but brings on board our platform, a sound mind, accomplished administrator and proven performer, who has won the admiration of the Zamfara people by virtue of your exceptional leadership.” Zamfara governor last week defected from the PDP to the APC, over irreconcilable differences with some leaders of the main opposition party.”