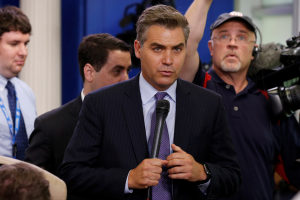 President Donald Trump has caused the White House accreditation of a CNN Reporter, Jim Acosta to be revoked after the reporter engaged him in a heated exchange during a news conference.

“As a result of today’s incident, the White House is suspending the hard pass of the reporter involved until further notice,” White House press secretary, Sarah Huckabee Sanders told reporters.

Acosta also tweeted that he had been denied entrance to the White House, where he was scheduled to film a spot for CNN, a network Trump has repeatedly targeted as “fake news.”

“I’ve just been denied entrance to the WH. Secret Service just informed me I cannot enter the WH grounds for my 8pm hit

He also shared video of the incident.

“The US Secret Service just asked for my credential to enter the WH. As I told the officer, I don’t blame him. I know he’s just doing his job.

“It was done in retaliation for his challenging questions at today’s press conference,” CNN communications said in a statement posted to Twitter. “In an explanation, Press Secretary Sarah Sanders lied. She provided fraudulent accusations and cited an incident that never happened.

“This unprecedented decision is a threat to our democracy and the country deserves better,” the company continued.

At the White House news conference yesterday, Wednesday, Trump called Acosta a “rude, terrible person” when he refused to sit down after asking the president about a racist anti-immigration ad, his re-election campaign had paid for and promoted ahead of Tuesday’s midterm elections.

Acosta refused to give up the microphone when a White House intern tried to grab it from him, infuriating Trump.

“I’ll tell you what, CNN should be ashamed of itself having you working for them … You shouldn’t be working for CNN,” Trump said to Acosta.

In a series of statements on Twitter, Sanders characterized Acosta’s actions as “placing his hands on a young woman,” though video of the exchange shows Acosta turning away from her as the intern reaches over his arm to take the microphone from his hand.

“This is a lie,” Acosta tweeted back at Sanders.

Reporters quickly began defending Acosta and denounced the accusation Sanders lodged at him.