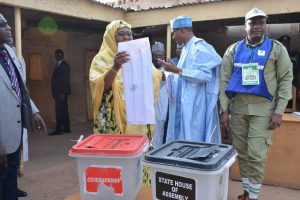 President Muhammadu Buhari has said that he had long expected that his main challenger in the February 23 Presidential election in Nigerian and candidate of the Peoples Democratic Party (PDP), Atiku Abubakar would go to court to challenge the outcome.

Buhari, who spoke to news men shortly after he and his wife, Aisha, cast their votes today, Saturday at the Kofar Baru 003 polling unit, Daura in Katsina State, in the governorship and state assembly elections, said that he expected the court case entered into by Atiku to happen.

Asked to comment on the decision by Atiku and his party, PDP to challenge the outcome of the February 23 presidential election, President Buhari simply said: “I expect that to happen.”

Buhari made it clear that the reported cases of violence across the country in today’s elections should be left to the law enforcement agencies, especially the police “because they have been meeting virtually on a 48-hour basis to make sure that they have identified the flashpoints, as you mentioned, wherever they are and make arrangements to counter it.