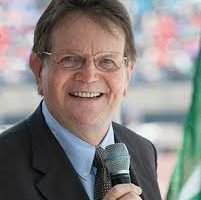 German Christian Evangelist whose visit to Kano led to violent riot resulting in several deaths in October 1991, Reinhard Bonnke is dead. He was born on April 19,1940.
His death was announced today, December 7, by his wife, Anne, via his verified Facebook page.
Anni wrote: “Dear Brothers and Sisters in Christ. It is with sorrow that the Bonnke Family would like to announce the passing of our beloved husband, father, and grandfather, Evangelist Reinhard Bonnke.
“He passed away peacefully, surrounded by his family, on December 7, 2019. For the past 60 years, he has preached the glorious Gospel of Jesus throughout the entire world. We want to thank you on behalf of him and our family, for your kind love and unwavering support, which enabled him to preach the matchless message of salvation to countless people. He preached Jesus.”
Riot broke out in Kano sometime in October 1991 few days before the arrival of Reinhard Bonnke with a team of Christian evangelists from America and other countries, leading to the death of several people, though the government of Military President Ibrahim Babangida put the death at eight.
Muslims in Kano took to the streets, expressing anger the attitude of the police who a few weeks earlier, denied a permit for a South African Imam to go to Kano, an Islamic stronghold in the Muslim-dominated north of this West African nation. The same police granted permission for the Reinhard crusading evangelism.