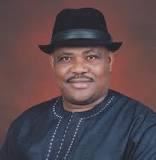 Rivers State Governor, Nyeson Wike has promised that a ransom of N50,000,000.00 will be given to any person with useful information that would lead to the arrest and prosecution of the leader of the outlawed Indigenous Peoples of Biafra (IPOB) in the State, Mr. Stanley Mgbere.
In a broadcast yesterday, October 23 to the people of the State, Governor Wike said that he would not allow IPOB miscreants to disturb the peace of the state.

“We cannot allow IPOB miscreants and other misguided similar groups to threaten our collective peace, security and wellbeing under whatever guise.”

He appealed to the people to remain calm and not to take the laws into their hands despite the intense provocation “as government has the capacity to deal with the challenge and ensure the safety of lives and property.

Thank you and may God continue to bless Rivers State.