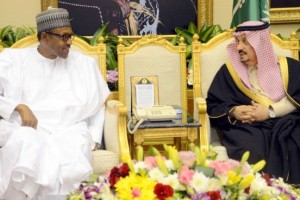 In a telephone conversation with President Buhari today, Thursday, the Custodian of the Two Holy Mosques wished the Nigerian President success and good health in his second term in office.

The Saudi King extended good wishes of steady progress and prosperity to the government and people of Nigeria.

President Buhari expressed appreciation to the King even as he affairmed his readiness to enhance aspects of cooperation between the two countries in various fields.

This was even as the Russian Ambassador to Nigeria, Alexey Shebarshin, sent a congratulatory message, saying: ”I am honoured to extend my congratulations to you personally, Mr President, and the people of Nigeria on the successful conduct of free, transparent and credible Presidential and National Assembly elections on February 23, 2019, that will shape the destiny of this nation for the upcoming four years and beyond.”

While describing the elections as yet another substantial step towards further strengthening of Nigerian democracy, the Russian Ambassador wrote: ” It is my conviction that your decisive victory will pave the way for yet stronger and more prosperous Nigeria that you will be able to deliver on the people’s mandate. ”

The Russian Ambassador expressed the hope that the Nigerian President’s second term in office will be associated with further enhancements of bilateral cooperation and closer contacts between the two countries.

The United Kingdom’s Minister of State for Africa, Harriett Baldwin, in a congratulatory message said: ”I offer my congratulations to President Buhari on securing a second term as the Nigerian President. The UK is a long-standing friend and partner of Nigeria and the Nigerian people, and a stable and prosperous Nigeria benefits Africa and the world. ”

This was even as the French Ministry for Europe and Foreign Affairs said: ”France congratulates President Muhammadu Buhari on his re-election on February 23. It will continue to stand by Nigeria and to provide its full support for the implementation of the country’s priorities, especially economic diversification, job creation, counter terrorism and the fight against corruption.”