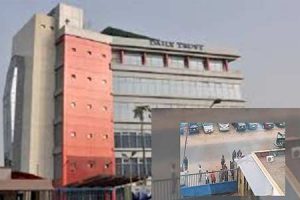 Federal Government of Nigeria has directed soldiers who sealed the Abuja headquarters of the Media Trust Limited, publisher of Daily Trust, Sunday Trust and Aminyya (the Hausa version), to vacate it immediately.

The order, according to inside source, was obeyed last night, Sunday, with the soldiers leaving the premises.

In a Tweet by the senior special assistant to President Muhammadu Buhari on media and publicity, Malam Garba Shehu said: “issues between the military and the newspaper (organization) as they affect the coverage of the war in the Northeast will be resolved through dialogue.”

The soldiers, yesterday, took over the premises of the newspaper headquarters, preventing staff and other people from going in or coming out, thereby threatening the production of Monday edition of the newspaper. It was not immediately known why the soldiers took suh action, including arresting the Bureau Chef and a reporter of the newspaper in Maiduguri, the Borno State Capital.

However, sources said that the action of the military might not be unconnected with the news published in the Sunday edition of the newspaper concerning the military’s confrontation with Boko Haran insurgents in the Northeast.

Shortly before the Federal Government directed the military to vacate the premises of the Daily Trust headquarters last night, the President of the Nigeria Labour Congress (NLC), Ayuba Wabba had issued a statement condemning the action of the soldiers.

In a statement, Wabba said: “no explanation is good enough for this extreme action. It is bizarre and represents repression and violation of press freedom.”

The NLC Boss reminded the military that Nigeria is in a democracy and that the media constitute one of the strong institutions in our democracy.

According to him, Daily Trust Group represent some of the best traditions in journalism practice, saying that they are neither associated with sensationalism nor some of the darker side of journalism.

“The arrest of its personnel and shutdown of its  office  portend evil and represent a  throwback to the dark days of the military.

“If the military authorities have issues with the news paper, even if those issues pertain to national security, there are established channels for dealing with them.

“Accordingly, we urge the military to order the immediate release of the detained staff and reopening of the newspaper office.

“In these frighteningly difficult times, the military need more friends than self-made enemies.”