Home FOREIGN Senator Opens Up On Sexual Scandal In American Military, Says She Was... 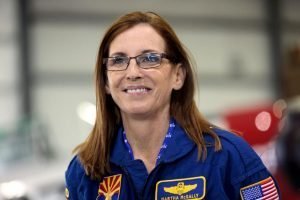 A United States of America Senator, Martha McSally, has opened up on the widespread sexual scandals in the military circle. She was the first female US fighter pilot to fly in combat.

The Arizona Republican Senator, who was testifying in a hearing on the armed services’ efforts to prevent sexual assaults, said she did not report the rape as she felt ashamed and confused, adding that she had lacked faith in the system.

“I stayed silent for many years, but later in my career, as the military grappled with the scandals, and their wholly inadequate responses, I felt the need to let some people know, I too was a survivor.

“I was horrified at how my attempt to share generally my experiences was handled.

“I almost separated from the Air Force at 18 years of service over my despair. Like many victims, I felt like the system was raping me all over again.”

Reports of sexual assaults across the military jumped nearly 10 percent in 2017, according to the Pentagon. In January, another female senator said she had been raped.

Joni Ernst said she was sexually assaulted while she was a student at Iowa State University by someone she was in a relationship with who was “physically and sexually abusive”.

The Iowa Republican told Bloomberg she had called the campus sexual assault hotline and ended the relationship but did not report the incident to police.

She did not reveal her alleged attacker’s name.