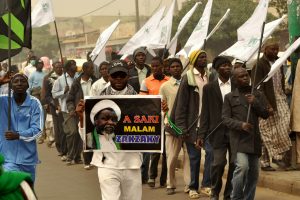 The Islamic Movement in Nigeria, otherwise known as Shiites, followers of detained Sheikh Ibrahim El-Zakzaky have carried their protest to the Embassy of the United States of America in Nigeria, accusing the US of aiding and abetting the mass killings of their members.

The protesters stormed the premises of the Embassy today, Thursday, carrying placards and chanting songs with negative messages to express their anger. Armed mobile policemen were strategically positioned around the premises to maintain peace around the embassy.

Their spokesman, Abdullahi Mohammad Musa, accused the US of deceiving the world that they are human rights defenders, but use it as camouflage to perpetrate their ulterior motives and atrocities.

He condemned the role allegedly played by the US during the Zaria massacre, where he said more than 1,000 members were killed, while many others sustained injuries.

“There was the mass burial of more than 1,000 persons. Some of them were even alive. They were saying ‘I am alive, I am alive,’ but Nasir el-Rufai, under the order of the American Ambassador to Nigeria, ordered the Nigerian Army thugs to bury these people in a mass grave.

See also:  After 33 Years Of Being Pastor, I Want To Now Try My Hand On Presidency - Pastor Bakari

“Zaria Massacre is the greatest atrocity committed in Africa against human rights. America is pretending and deceiving the whole world that they are protecting human rights in the whole world. You are deceiving yourselves. It is clear now that you are the sponsor, the planner and executor of Zaria massacre and all the killings of innocent citizens in Nigeria. America is totally behind it.

“I want to remind you about Mr. el-Rufai’s intolerance and threatening words to his political opponents and his recent ‘body bag’ threat to foreign observers. As a result of Mr. el-Rufai’s hate speeches and role in Zaria massacre, numerous legal luminaries in Nigeria and abroad have tagged him for prosecution and sanctions.”

He said that the group would not relent in demanding justice and the unconditional release of Sheikh Ibraheem Zakzaky.