Home FEATURES Sudanese Take To Street To Protest Rise In Price Of Bread; 19... 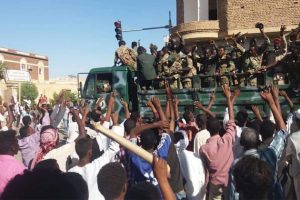 No fewer than 19 people have been killed and 219 others injured today, Thursday, in a protest staged by the citizens of Sudan over increase in the price of bread.

Report reaching us said that the Sudanese anti-riot police clashed with the protesters, who are demonstrating against a rise in bread price with 19 people, including two security force personnel, killed in the process.

Government spokesman, Boshara Juma, speaking on state television, confirmed that 19 people lost their lives in the incidents, including two from security forces, adding that 219 people were wounded.

Sudanese authorities had previously said that eight people have been killed in clashes in Khartoum and several other cities since the protests began on December 19.

Sudan Islamist party urges probe into the killing of protesters

Sudan’s top Islamist party, a member of President Omar al-Bashir’s government, called Wednesday for a probe into the killings of protesters in demonstrations that have rocked the economically troubled country.

At a press conference in Khartoum, Popular Congress Party senior official, Idris Suleman said that his party’s own reports indicated that 17 people “were martyred” and 88 wounded in the demonstrations.

Condemning the killings, the party, founded by late Islamist leader, Hassan Turabi, urged the authorities to find those responsible.

“We call on the government to launch an investigation into the killings,” Suleman said.

“Those who committed these killings must be held accountable.”

Popular Congress Party is part of Bashir’s government and has two ministers of state in the cabinet and seven lawmakers in parliament.

Turabi, who died in March 2016, was a leading force behind the 1989 coup that brought Bashir to power, ushering in an Islamist regime that hosted Al-Qaeda leader Osama bin Laden from 1992 to 1996 in Sudan.

Police and security officers remained deployed in several parts of the Sudanese capital on Wednesday, but no new demonstration had been staged so far.

Bashir has sought to tamp down the discontent by vowing to “take real reforms” to solve Sudan’s economic woes.

But his statements appear to have done little to appease protesters angered by financial hardships.

Sudan is mired in economic difficulties including an acute foreign currency shortage and soaring inflation.

The crisis has worsened despite the lifting of an economic embargo by the United States in October 2017.

Inflation is running at close to 70 percent and the Sudanese pound has plunged in value, while shortages in bread and fuel have been reported across several cities including Khartoum.

Since the start of the protest movement, Sudanese authorities had arrested several anti-government figures with liberal and communist backgrounds.