Home SPORTS Super Eagles In Festival Of Failures, As They Kowtow To Mexico 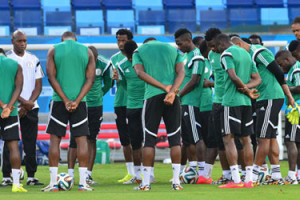 The Super Eagles of Nigeria, again suffered another defeat of 4-0 in the hands of their Mexican counterparts, in a international friendly. The Super Eagles have failed woefully to record any win in their eight friendly matches so far.
Early this morning, June 4, at the 77,500- capacity LA Coliseum in Mexico, the Super Eagles started the game with some kind of determination, but were given early warning by two quick goals and topped it in the second half with another two.
In what was the concluding tie in the 2021 MexTour Series, Hector Hererra gave Mexico the lead after poking in from his team’s first corner kick barely two minutes into the game.
Though Ibrahim Sanusi tried frantically to clear the ball off the line, he could not deny the North Americans their first goal of the game.
While the dust was yet to settle on the first, the fast-paced Mexicans came calling again; opening the Nigerian defence before Rogelio Funes Mori blasted home from close range to make it 2-0 for Mexico.
Though the fast tempo of the Mexicans was slowed down by the Eagles, the CONCACAF giants dominated virtually in all departments of the game.
Nigeria’s first corner kick did not come until the 35th minute but they made little out of it.
That nonetheless, it wasn’t all Mexico in the first half as Nigeria had their own chance late on.
Nigeria’s last win in a friendly match was in March 2019 when they beat Egypt 1-0 with a first-minute goal by Paul Onuachu.
Source PREMIUM TIMES.