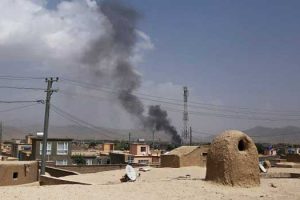 Poll-related violence killed or wounded dozens of civilians on Saturday, a week before voters cast their ballots across the war-torn country.

Another 15 soldiers were captured and five wounded during the overnight attacks involving “a large number of Taliban” in Pusht-a-Rud district of Farah province, provincial council chief Farid Bakhtawar told AFP.

Defence ministry spokesman, Ghafoor Ahmad Jawed said reinforcements had been sent to the area, even as he added that Taliban have also suffered huge losses.

Violence has escalated in the months leading up to the October 20 parliamentary election, with hundreds killed or wounded.

On Saturday, a motorcycle carrying explosives detonated among supporters of Nazifa Yousefibek, a female candidate for the northeastern province of Takhar, killing 22 and wounding 36, mostly civilians.