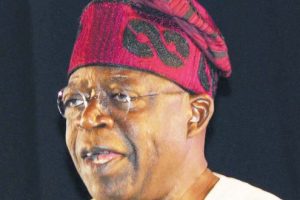 The Bola Tinubu Support Organization (BTSO) has vowed that the national leader of the ruling All Progressives Congress (APC), Bola Ahmed Tinubu will contest the 2023 Presidency and win.
In a statement, the Director of Media and Communications of the group, Onujabe Nasir said: “the organization wants to assure the perceived enemies both within and without that Nigeria is a democratic space for every eligible Nigerian to practice his/her constitutional rights to vote and be voted for, and as such Bola Ahmed Tinubu shall contest 2023 and become Nigeria President.”
He said that under the Tinubu presidency, a new Nigeria will be born democratically, being a true democrat and development political engineer, Lagos new look and National Assembly Leadership speaks volumes, etc.”
The group described Tinubu as a bridge builder with tentacles across the nation and handshake over the seas to the Western Worlds.
“These alone caused fears and nightmares to his would be opponents come 2023. This is a reminder to his traducers that their action or inaction against Tinubu popularizes and swells his sympathizers for the coveted sit.
“How we wish they knew they are campaigning for his 2023.”
The group pledged its total support for Tinubu despite the crisis that trailed the EndSARS Protest that rocked the Nation adding that the truth emerging had vindicated him from unwarranted accusations of sponsorship at the early stage of the protests.
“It is highly regrettable and embarrassing that such accusations came from a professor in one of the prestigious University in Nigeria who failed to make his finding and intellectual responsibility before jumping to conclusions that Bola Tinubu was the sponsor of the protests.
“The professor’s poor reasons for accusing Tinubu was that the protesters occupied Lekki Toll Gate unchallenged by Lagos State government and Tinubu himself and that he (Tinubu) allowed his property to be used by EndSARS protesters to discredit Muhammadu Buhari’s government so that he can contest 2023 presidential election.
“The circumstantial political victim (Tinubu) has vociferously stated that Lekki Toll Gate is never his property and that he has no economic interests.
“It is foolhardy to believe that a sponsor can suddenly turn victim of his benefactor in his widest imagination. The sudden turn of event exposes a conspiracy theory against our principal all for 2023 election, which Almighty Allah has ordained him for.
“The organization make bold to say that JAGABAN does not need to discredit Buhari to gain relevance come 2023, in the single fact that he (Tinubu) has done and still doing all he needed to do to qualify him for ticket in the APC to contest the election if he decides to do so.
“For the purpose of record, Tinubu is the Pathfinder of this regime which is why he is so kin and concerned on the success of President Buhari as a priority to him than 2023.
“His journey from the APC alliance to Buhari’s primary election with Atiku Abubakar and co. is still very fresh in our minds. Therefore, no amount of blackmail, name calling and slander will ever pitch Buhari and Tinubu’s paths or head-on collision.