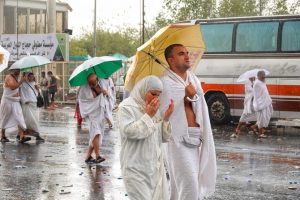 Torrential rain and thunderstorms were said to have greeted about three million pilgrims from all over the world that converged at mount Arafat today, August 10 Holy Land of Saudi Arabia.

Reports reaching us indicated that the rain started after a hot sun that started the day as pilgrims made their way from Mina to Arafat on the second day of Hajj. It was gathered that the weather suddenly changed in the afternoon with heavy rain and thunder storms.

With rain, perceived as a sign of mercy in Islam, many pilgrims stopped to pray as the rain fell and offered calls of “God is greatest.”