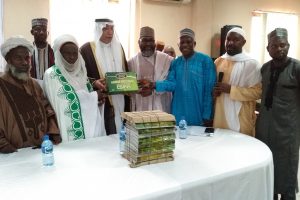 The Ambassador of the Kingdom of Saudi Arabia to Nigeria, Adnan Mahmoud Bostaji has promised that his country will work with the committee that carried out the translation of the Holy Qur’an into Ebira language to spread the language among other African languages currently being promoted.

Ambassador Adnan Bostaji, who spoke today, Saturday at the public presentation at the National Mosque Abuja, of the Ebira Qur’anic translation, said that the King Fahd Glorious Qur’an Printing Complex has so far printed translated Qur’an in 18 different African languages.

“We will be working together to make the Ebira language one of those languages, and we will soon see,  by the Will of Allah, the Glorious Quran completely translated into Ebira language. ” 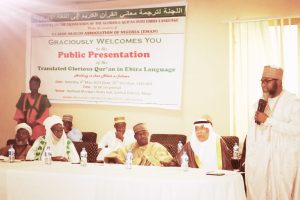 The Ambassador said that since 1984 when the Qur’an Printing Complex in Madinah Al-Munawwarah was established, it has printed the Qur’an and distributed to Muslims in various places of the world in various recitation patterns.

“It has also translated the meanings of the Qur’an into more than 70 languages, some of which are in the printing stage, whereas other translations are being prepared and studied. As at the beginning of 2019, the distribution of the copies of the Glorious Qur’an as well as recording thereof, and parts of the Qur’an, and Yasin Quarter, translations and others, to Muslims within and outside the Kingdom in various places of the world, has reached 311,882,269 copies.”

Ambassador Adnan Bostaji said that the Complex presents about 1,800,000 copies of the Qur’an to pilgrims who visit the Holy land to perform hajj every year, adding that during the hajj season of last year, 1,626,608 copies were distributed.

He said that the translation of the Glorious Qur’an into Ebira language followed the Sunna (practice) of Prophet Muhammad’s saying: “convey the message (of Allah in the Qur’an) from me even if it were just one verse. 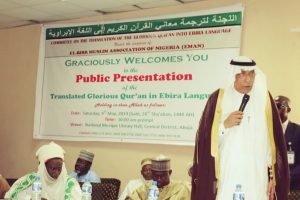 Giving the historical evolution of the translation of the Qur’an into Ebira language, chairman of the committee, Alhaji AbdulGaniyu Ahmad said that it all started by Yusuf Ozi Usman, a veteran journalist, author of many books, including Ebira Engrlish Dictionary and Publisher, when he called maiden meeting comprising late Alhaji Isah Ovurevu Ademoh, Ustaz Murtada Abd-al-Rahman.

“He also brought his robust knowledge of the art of translation to bear in the committee’s work, with adherence to the current acceptable format of rendering Ebira language in writing.”

Alhaji AbdulGaniu said that he was brought into the committee at the demise of Alhaji Isa Ademoh, including the son of the late chairman, Malam Kabiru Ademoh.

Other members of the committee of the committee he listed were an Islamic scholar, Sheikh Moosa Yousuf Onogu; Ustaz Musa Salihu Ogaminana and an Arabic lecturer at the University of Abuja, Ustaz Ismail Nuhu Abarigi.

Also speaking at the public presentation, the guest speaker, Dr. Abdulfattah Adeyemi traced the history of Ebira and the language, saying that the translation of the Qur’an into the language will enable over 80 percent of the over two million speakers of the language to benefit from Islamic and Qur’anic knowledge, which Prophet Muhammad enjoined every Muslim to seek even if in China.

The occasion was attended by Governor Yahaya Bello of Kogi state, represented by one of his top aides, Alhaji Abdulmumuni Okara, many Islamic scholars and traditional rulers.