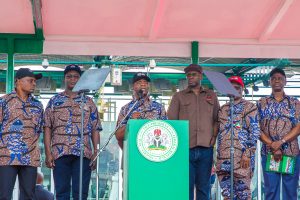 Vice President Yemi Osinbajo has listed qualities that made the preset government of Muhammadu Buhari different from the previos ones and stand it out as workers-friendly one.

Speaking today, Wednesday as the workers celebrate May Day at the Eagle Square in Abuja, the nation’s capital, Professor Osinbajo said that on assumption of office in 2015, in spite of the daunting economic challenges, which confronted the country at the time, Buhari government ensured that no worker was retrenched across the country.

“We further kept faith with this commitment by providing bailout funds for States unable to pay salaries and other benefits in order to pay accumulated arrears. We also released the Paris Club refunds owed since 2005 to make sure workers were not owed anything.
“We also ensured the payment of outstanding benefits of retrenched Nigerian Airways workers owed for decades. We also ensured the Pension Transitional Arrangement Directorate (PTAD), also paid arrears owed to parastatals and Civil Service pensioners covering 101,393 Civil Service pensioners on all grade levels and 76,310 parastatals pensioners across 186 agencies.
“This is in addition to arrears paid to pensioners in the Police and Customs Services in 2016 and 2018. Our administration also settled the issue of benefits of Nigerian Armed Forces and Paramilitary personnel who were dismissed and later pardoned for participating on the side of the secession in the course of the Civil War from 1967-1970. All of these veterans have now been paid their benefits.”
The Vice President looked at the government’s Social Investment Programmes which he described as the largest of its kind in Africa, directed at ensuring that the government provides opportunities in both the formal and informal sectors of the economy.
According to him, the largest numbers of Nigerian workers are informal workers, including petty traders, smallholder farmers, artisans and tradesmen, adding that they deserve the government respect and the protection of all labour laws.
“Our N-Power programme currently employs 500,000 young Nigerian graduates and additional 75,000 in specialized training as builders, automotive technicians and in other vocations. We have also expanded this programme to include technicians in animation and also specialists in other areas of technology.
“Our Homegrown School Feeding Programme where we now feed 9.5 million children daily in 30 States, provides opportunities for over a 100,000 cooks and farmers across the country.
“Our TraderMoni and MarketMoni schemes provide almost 2million loans to petty traders in all States of the Federation. At the Next Level of our administration, we intend to expand the scope of these micro-credit loans to traders and artisans.
“Our Anchor Borrowers’ Programme has also provided over 1million loans to smallholder farmers across the country. Already, that scheme is being expanded to cover yet another one million farmers all across the country.”
Osinbajo stressed that this year’s Workers’ Day theme: “Another 100 Years of Struggle for Jobs, Dignity and Social Justice in Nigeria’’ is not merely a headline for the celebration, but that Buhari’s government truly believes that the Nigerian citizen, especially those at the bottom of the pyramid, must be the central focus of all economic planning and budgeting.
“The welfare and well-being of all these Nigerians who work everyday and render honest services every day is the true benchmark of our commitment as government and a people to social justice and dignity of all Nigerians.
“We will continue to commit ourselves to the cause of improving the lot of every working Nigerian and providing for those who cannot work.”
The Vice President reassured workers that the government is determined to fully implement the new N30,000 National Minimum Wage which President Buhari signed into law recently.