Home NEWS Why I am Proud Of My Wife, President Buhari Opens Up 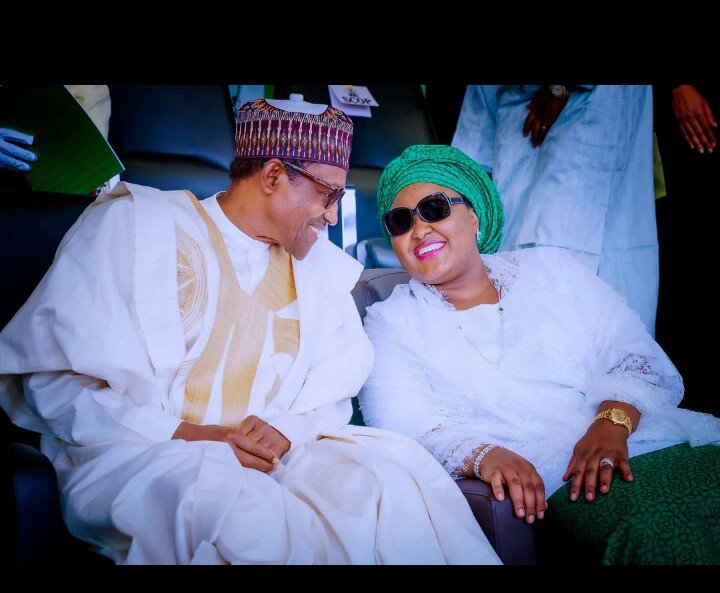 President Muhammadu Buhari has opened up on the reason why he is proud of his wife, the First Lady, Aisha.
Speaking today, October 10, at the inauguration of the All Progressives Congress (APC) woman Presidential Campaign Committee in Abuja, Buhari said that Aisha had remained a strong pillar behind his success at the 2015 and 2019 presidential election.
Represented by his Chief of Staff, Professor Ibrahim Gambari, the President said: “I am proud of the exemplary role that the First Lady has played as a strong pillar of support and voice for our women as well as our youth.
“Her unwavering commitment to mobilizing women significantly influenced our party’s victories in the 2015 and 2019 presidential elections.”
According to President Buhari, such great feats could not have been achieved without the support of women of the party.
Also thanking the wife of Vice President, the wives of APC governors, and all the women leaders at all levels for their tireless efforts and support, he commend the leadership of the APC, for showcasing the value and importance of the women and youth from all the geo-political zones of the country to the political process through the establishment of the committee.
Buhari recalled that in the 2015 general elections, about 3.6 million housewives voted in the presidential election, saying that this figure ranks third next to about 4.4 million students in the 2019 general elections.
“Women accounted for 47 percent, almost 40 million of the 84 million registered voters throughout the nation.
“We must continuously co-opt and make significant inroad into these demographic and voting segments.”
The President also recalled that the Independent National Electoral Commission (INEC) chairman recently made a projection that Nigeria’s voting population could be as much as 95 million for the 2023 general elections.
“For statisticians in the room, you can imagine what that means in terms of potential votes that women could bring to the table.
“Counting today, we are left with approximately 137 days before the Presidential and National Assembly elections, which is scheduled for the 25th of February, 2023.
“Out of the 36 states of the federation, 30 states will be holding their gubernatorial elections on the 11th of March. “The mission that lays ahead of the committee is very clear and time is not on your side.
“As this launch is being hosted in Abuja, we must remember that the real war lies in far flung places away from Abuja. “The task ahead lies in over 8,000 wards and 774 local governments across the country, where party faithful will have to make a case before fellow citizens on our party’s candidate articulating the vision and the programme for the country.
“The campaign, therefore, should recede the temptation for it to be turned into an Abuja centric activity but establish the connection between the voting public and our presidential candidate, and for other candidates for offices throughout Nigeria, that should be the ultimate objective.”
Buhari said that throughout his political journey and his tenure as President of the Federal Republic of Nigeria, women have remained the most loyal and supportive group in his mission for a better Nigeria despite the challenges.
“They should extend this same support to our presidential candidate, Senator Bola Ahmed Tinubu, and Vice Presidential candidate, Senator Kashim Shettima.”
He promised that as the nation prepares for the 2023 general elections, his administration would continue to listen to the strong voices of the women for gender justice, social inclusion, and adequate participation in the affairs of the country and in accordance with global, regional, and national conventions, agreements, protocols, and policies to which Nigeria is a signatory.
“It is in this regard that I hereby direct the Honourable Attorney General and Minister of Justice in conjunction with Honourable Minister of Women Affairs to work closely with the Office of the First Lady in ensuring that important legislations that can be brought before the National Assembly in furtherance of entrenching constitutional change and legal change and creating a level playing field for our women to be carried out assiduously.
“Considering the strategic role women have played in APC victories, we call on you once again to begin organizing and mobilizing vigorously the electorate at all levels for APC victory at the 2023 polls through the committee in an inclusive and cooperative manner.”
President Buhari considered the inauguration of APC Women Presidential Campaign Committee today as the most crucial component of the 2023 campaign, calling on all members of the committee to take up this great responsibility as a testament of their selfless service to the APC.
“I strongly believe that this committee will take the APC to greater heights by developing and implementing a collective and inclusive party’s strategy to ensure APC victory in the 2023 election because there is no alternative to our victory.”