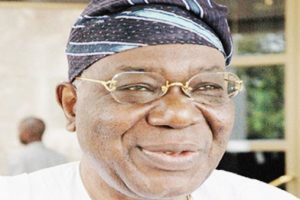 President Muhammadu Buhari has said that Nigeria owes Chief Earnest Shonekan, who died today, January 11 in Lagos, a lot of gratitude because he saved the country from disintegrating.
“With courageous wisdom, Chief Shonekan left his flourishing business career to become the Head of Government, at a delicate time when the country needed someone of his calm mien and pedigree to save the ship of state from sinking.”
In a condolence message expressing profound sadness on the death of Shonekan, who he described as “a great statesman and former Head of the Interim National Government,” President Buhari said that Chief Shonekan demonstrated to all that his love for the country and commitment to its development, peace and unity transcend the trappings of office and the transient nature of political power.
President Buhari emphasized that Nigeria owes a great debt to Chief Shonekan, saying that he was peacemaker, “who even at the twilight of his life time never stopped believing and working for a prosperous and democratic country.”
The President said that the late Head of the interim government was an internationally respected statesman who had given his best to the country and the world up to the end of his life.
He expressed his deepest condolences to Chief Shonekan’s wife, Margaret, loved ones, as well as the government and people of Ogun State.
He prayed that the memory of the departed Head of Government will remain a blessing to Nigeria, wishing him perfect peace with Almighty God.
Chief Shonekan died today in Lagos at the age of 85.
He was the head of the interim government, put together by the former military President, General Ibrahim Badamasi Babangida when he was relinquishing power on August 26, 1993.
Shonekan lasted in power up to November 17 of the same year when General Sani Abacha sacked him via a palace coup.