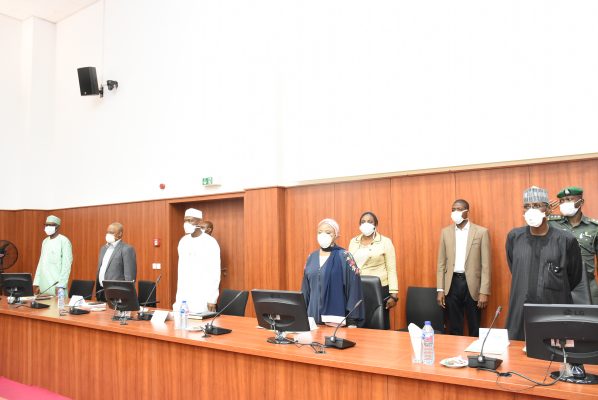 Minister of the Federal Capital Territory (FCT), Malam Muhammad Musa Bello has warned that those who violate the stay-at-home order, including the partial curfew would be arrested and prosecuted.
At an emergency security meeting yesterday, March 30, the Minister said that all organs of the FCT Security Services and other government agencies have agreed and worked out modalities to ensure that all entry and exit points of the FCT and by extension, other satellite towns, are manned by relevant officials to ensure that everybody stays home.
“I want to also reiterate that except those that have been allowed and are exempted from this cessation of movement, all other citizens and residents of the FCT are enjoined to stay indoors.

“Where these regulations are flouted, I want to emphasize that the security agencies have been empowered to arrest and prosecute defaulters because we will not allow any individual or groups, as a result of their inability to honour this medical advice, jeopardize the health of multiples because as has been shown the world over, one of the greatest weapons to fight this disease is confinement and containment in one place. That way, contact tracing becomes much easier and those that are infected are easily provided medical services.”
The Minister said that Palliative Committee headed by the Minister of State, Dr Ramatu Tijjani Aliyu, has been set up to find ways of cushioning the effect of the cessation of movement on the more vulnerable members of the society.
Chairman of the six Area Councils, traditional and religious authorities, NGOs and other support groups are members of the committee.
He said that there are already modalities to identify the truly indigent members of society that will require assistance.
“The system of identifying vulnerable people within the FCT community is already in place, using the 60-ward structure of INEC, as well as the traditional and religious authorities. Within every community, those that are vulnerable are known and also, under our Social Development Secretariat, we already have a database of vulnerable people that have been taken care of under the conditional cash transfer.”
The Minister said that the administration will also tap into the data base of religious groups that already have records of the indigent in their various communities whom they have been assisting even prior to the current outbreak of Covid 19.
Muhammad Musa Bello reminded the residents of their individual and collective responsibilities in fighting coronavirus.
Muhammad Musa Bello seized the opportunity to announce that he was tested for coronavirus and the result was negative.