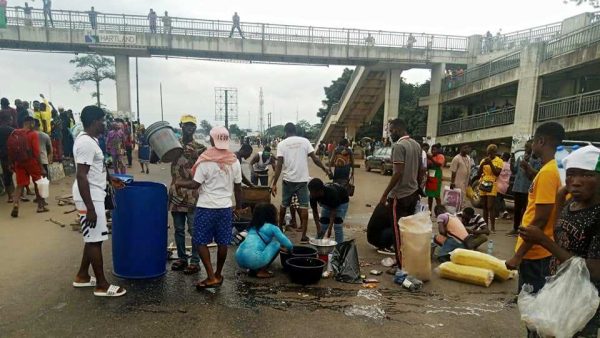 Thousands of youths under the cover of #EndSARS protest, have converted the ever-busy Benin-Lagos Expressway into a kitchen.

The protesters, in a relaxed mood, cooked and ate jollof rice under the pedestrian bridge in front of the main gate of the Federal Government-owned University of Benin (UNIBEN).

The protesting youths, today, October 17, blocked the expressway from the old toll gate to Uselu Market in Benin, a distance of about 10 kilometres, making many commuters stranded with complete standstill for over five hours.

One of the protesters, who simply identified herself as Joy, said that the bags of rice and other items were donated by an unnamed supporter of the protest.

She called on the Federal Government to quickly ensure comprehensive reforms of the police for the protest to end.