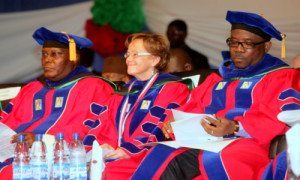 Two alumni of American University of Nigeria, Yola in Adamawa state, Ms. Christiana Okere and Ms. Marilyn Elechi, have earned scholarships worth a total of $134,100 to study medicine at St. George’s University (SGU) School of Medicine, Grenada, in the West Indies.
The two, who graduated from AUN’s pre-med offerings in the Natural and Environmental Sciences (NES) program in 2016, were accepted into a five-year program in Doctor of Medicine that will cost a total of $720,000 in tuition to complete.
A statement by the AUN’s Executive Director, Communications and Public Relations, Daniel C. Okereke said that Ms. Okere was awarded the Chancellor’s Circle Legacy of Excellence Scholarship worth $80,100, while Ms. Elechi won the International Peace Scholarship worth $54,000.
The statement said that an agreement between AUN and SGU allows AUN graduates to pursue medical studies at the SGU medical school, using their admission into AUN, saying that this cooperative venture is open only to students who meet all the SGU stringent requirements for enrolment in the combined programs leading to the pursuit of a career in medicine.
It said that such students must complete the relevant courses in the pre-medicine and pre-veterinary medicine programs of AUN’s program in NES.
The statement said that Ms. Okere and Ms. Elechi were chosen on merit from among a select group of SGU admission candidates with impressive academic and personal qualities.
“They were adjudged to possess the perfect combination of intellect, motivation, ability, and compassion to turn ambition into success in the field of medicine.
Ms. Elechi, who is currently interning at the AUN Foundation School was quoted as having said that SGU medical school scholarships are hard to come by, “so this is a big deal.”
The two beneficiaries described the rigorous application procedures that they had to go through, including a video-conferencing interview, to prove that they were deserving of not just the admission but also of the scholarships.
Ms. Okere said that they still have a long way to go to raise money to cover the full tuition cost of $360,000.
“My mum has told the whole church, and she is very proud of me, but we are running out of time to raise the remaining sum.”
The interim Associate Dean of School of Arts and Sciences, Dr. Jacob Udo-Udo Jacob, complimented the awardees, saying that the awards reflected well on the quality of education offered at AUN as well as the great relations between the two universities.
The statement said that for student to be accepted into Saint George’s, he or she must show a cumulative grade point average of at least 3.4 on a 4-point scale.
It said that after meeting all AUN and SGU admission criteria, candidate must then proceed to either the SGU School of Medicine or of Veterinary Medicine to obtain the BS/MD or BS/DVM degree.
It said that at the SGU School of Medicine, the qualified students will be eligible to complete the first two years of medical study in Granada and then the final two years of this combined program in clinical rotations at affiliated hospitals in the US and or the UK.
“Students who qualify for veterinary medicine will be eligible to complete the first three years of study in SGU and their final clinical year at affiliated veterinary schools in the US, UK, Canada, Australia, or Ireland.” [myad]