Home FEATURES 2015: What Is President Jonathan Waiting For? By Joe Igbokwe 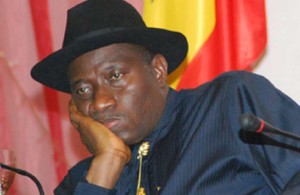 It is seven months away to the Presidential Elections scheduled to hold in February next year and yet President Goodluck Jonathan has not deemed  it fit to tell Nigerians if he is running or not.  His foot soldiers, running into thousands are traversing the entire political landscape telling Nigerians about the President’s Transformation Agenda and the need for continuity.  As the President is yet to make his intention known to Nigerians ,the Efulefu (nonentity) Alhaji Asari Dokubo has been telling the world that President Jonathan’s 2015 presidential ambition is a settled matter, elections or no elections.  If I can read Asari Dokubo’s lips very well, the votes of Ijaw people alone will make President Jonathan the president again in 2015.
Even if the Ijaw people do not vote, barrels of crude oil from the Ijaw nation will vote for President Goodluck Jonathan. A notorious coward that could not mutter a word when the Late General Abacha killed 13 Ogoni Sons including Ken Saro-Wiwa is the one calling the shots, abusing everybody, threatening fire and brimstone.  Asari Dokubo has about four wives now, he is building a University in a neighbouring country and he may own a private Jet. Ah! Democracy has been good to Asari Dokubo, Edwin Clark, Bishop Oritsajofor and few others.  Yes, democracy has been very good for them.  Yes, life is good now for the school drop out, Asari Dokubo.  But time will tell.
Yes, the political train of the president’s Campaign Organization has been moving with frightening speed and yet the man at the centre of it all is yet to make a statement on the matter.  Is it that the president is afraid to declare his ambition? What is he waiting for? What calculations and permutations are Nigerians waiting for? Will the ballot boxes be the deciding factor or the AK 47? Is it that the stolen 20 billion US Dollars has not done enough work for the President to have confidence? Could it be that the DSS, Army, Navy, Air Force, Police, SSS, DMI, Civil Defence, Road Safety, Prison Warders, Customs & Excise etc have not given the go ahead order? Could it be that the Men of God led by Bishop Oritsejafor are still yet to speak? Are they still consulting? The fear of the unknown is keeping President Jonathan from making a public statement on the matter. The open robbery they planned for Osun was what they needed to kick start the president’s campaigns but it went bad .The votes, robbers and electoral thieves led by the Junior Minister for Defence Senator Obanikoro, with 73,000 armed men could not deliver the State of Osun to them.  Osun was a bad business for them because God stopped their evil machinations using the weak but courageous Osun people to defend democracy with bare hands.  Both APC and PDP knew that the State of Osun holds the key to the battle for 2015. While PDP went to Osun with 73,000 armed men APC had nothing but the decency of the human spirit, the type that was found in John Knox, a Scottish Reformer.
Osun outing was a bad business for President Jonathan’s handlers and they have been forced back to the drawing board to re-assess their criminal disposition to stealing votes. Osun elections exposed PDP and their foot soldiers and things may never be the same again. 2015 hangs in the balance for PDP, and President GEJ.
I will continue to insist that President Jonathan’s ambition to rule beyond 2015 is a threat to National Unity, given the circumstances that led to his coming to power and the way his foot soldiers are digging in concerning 2015 project. It is putting a knife on things that hold us together as one political entity.  Some political prostitutes have been shouting from the rooftop since I said this few weeks back; but let me ask this question:  Where were they in the days of the locusts when over 5000 Men and Women died for this democracy?  Where were these characters that overheat the polity today with their reckless and dangerous Statement?
A friend tells me that ambition is a propelling force that wheels along our sense of direction but it should not be inordinate or misdirected. For peace to reign in Nigeria there must be justice. That was what we struggled for from 1985 to 1998. Now, while we wait for President GEJ and his handlers, let the truth be told that Nigeria is bigger than everybody.