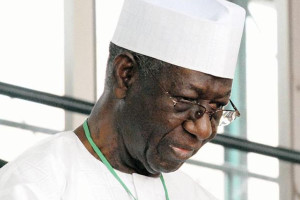 A politically active elder statesman who once served as Chairman of the Board of Trustees (BoT) of the then ruling People’s Democratic Party (PDP), Chief Anthony Akhakon Tony Anenih, has thrown in the towel in partisan politics.

This was even as the immediate past President of Nigeria, Dr. Goodluck Jonathan almost instantly begged Anenih to reconsider his stand.

Chief Anenih who announced his disengagement ‎from active politics today, Saturday at the presentation of his autobiography: “My Life and Nigerian Politics,” asked Nigerians to support efforts by President Muhammadu Buhari to end recession.

“I am persuaded that I have no more ambition nor any point to prove in politics. I am, therefore, glad to declare that, from today, I shall be withdrawing from active partisan politics. I shall, however, continue to avail the country of my experience, give suggestions and offer advice, as a statesman.”

The former PDP leader said that the current recession in the country is a national predicament which must be confronted by all irrespective of political affiliation, adding:“I therefore urge Nigerians to persevere and hope for better tomorrow. We must support and pray that God will give the President the wisdom and vision to steer the country away from recession to prosperity.”

But former President ‎ Jonathan, who was among distinguished personalities that attended the book presentation, feared that Anenih’s experience in security and politics would be wasted if he makes good his decision to quit politics at this time.

Chief Anenih was born in Uzenema-Arue in Uromi in present Edo state on August 4 1933. He joined the Nigeria police force in Benin City in 1951. Working from home, he obtained secondary school qualifications. He attended the police college in Ikeja, and was selected for further training in the Bramshill Police College, Basingstoke, England in 1966 and the International Police Academy, Washington DC in 1970.

He served as a police orderly to the first Governor General of Nigeria, Dr. Nnamdi Azikiwe. He worked as an instructor in various police colleges and in 1975 was assigned to the Administrative Staff College (ASCON), Lagos. He retired from the police as a Commissioner of police.

He was State Chairman of the National Party of Nigeria (NPN) between 1981 and 1983, helping Dr. Samuel Ogbemudia become elected as civilian Governor of Bendel State. However, the governorship was cut short by the military takeover of December 1983. He was National Chairman of the Social Democratic Party from 1992 and 1993, when he assisted in the election Chief M. K. O. Abiola as president. He was a member of the Constitutional Conference in 1994.

Anenih was a member of the PDM until early April 2002, when he transferred to the People’s Democratic Party (PDP). Anenih was said to have masterminded the 26 April 2002 declaration of President Obasanjo at the International Conference center Abuja. He was deputy national coordinator of Olusegun Obasanjo’s campaign Organisation in the 1999 and 2003 elections.
Chief Anenih was appointed Minister of Works and Housing in 1999. He subsequently became Chairman of the Board of Trustees of the PDP.

He is married to Josephine Anenih, a lawyer, who was the chairperson of the Federation of Women Lawyers from 1994 to 2000, and was the first National Woman Leader of the People’s Democratic Party (PDP) from 1999-2005. She was appointed minister of Women Affairs on 6 April 2010, when Acting President Goodluck Jonathan announced his new cabinet. [myad]