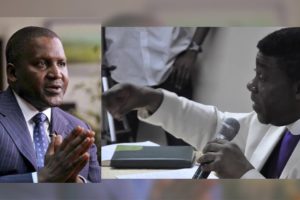 A former Secretary of the Christian Association of Nigeria (CAN), Archbishop George Amu, has predicted that the Africa’s richest man, Alhaji Aliko Dangote would someday become Nigeria’s President.

Archbishop Amu, who said the same God who told him that Donald Trump would become the President of America, revealed the latest prophecy to him.

He said that just as he prophesied on the 21st of August as he celebrated his 75th birthday, then, that Trump would win America’s election, God has now revealed to him that Dangote would be Nigeria’s President. However, he did not mention when Dangote would become President.

The Archbishop said that the same circumstance that brought about the emergence of Trump, would play out in the emergence of Dangote as the President, adding that Trump and Dangote have things in common as successful businessmen.

Archbisho said that God plans to use them to salvage their countries from problems.

See also:  Buhari To TB Joshua’s Followers: Life Is Not Defined By Longevity

He recalled that when he predicted Trump’s victory, no newspaper reported it, saying: “I even told my children to circulate the information on their Facebook but they declined. The same God, who revealed Donald Trump’s victory in the US, has also declared His intention to install Dangote as the future President of Nigeria.”

The 59 year old Dangote is worth $11.6 billion and is the President of Dangote Group, a conglomerate with interests in many sectors of the economy.  [myad]