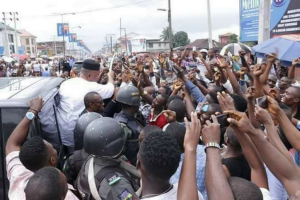 The ruling All Progressives Congress (APC), has cause to celebrate as it’s former chief critic, Senator Godswill Akpabio, formally decamped from the opposition Peoples Democratic Party (PDP) on which he was governor of Akwa Ibom State for eight years to it.

Akpabio, who until yesterday, was the Senate minority leader, still under the PDP, was welcomed into the fold of the APC today in Uyo, Akwa Ibom State capital by the National chairman of the party, Adams Oshiomhole, the National leader of the party, Asiwaju Bola Ahmed Tinubu and representative of the acting President,  Yemi Osinbajo in the person of the Secretary to the Government of the Federation, Boss Mustapha.

Addressing what was described as huge crowd of supporters, Senator Akpabio said that he decided to join APC because he discovered that President Muhammadu Buhari “is a man of integrity and a nationalist.”

According to him, APC is a party that would sweep away poverty and impunity, adding that with him in the party, he would be able to participate in helping to salvage the country.

“The country is at war and all the hands must be on deck to salvage the situation and not to aggravate it. As keepers of national emergency, everyone should put heads together. I decided to join to emancipate the people and provide succour for the people.”

He said that the PDP of today has no vision and the leadership is replete with arrogance.

He said that Akwa Ibom has joined the progressive states because the people were dissatisfied with the long misrule of the PDP.

He said that Akpabio built the people and provided them with infrastructure but the present PDP government was a failure.

Ekere said that the people have agreed to re-elect President Muhammadu Buhari in 2019. [myad]

Report reaching us from Uyo said that thousands of supporters trooped to the Ikot Ekpene Township Stadium for the rally to receive the Senator. [myad]