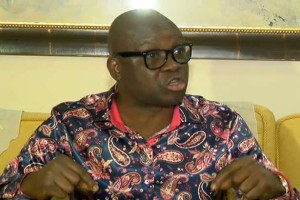 The All Progressives Congress (APC) in Ekiti State has declared Governor Ayodele Fayose as persona non grata as he was alleged to be thinking of dumping the Peoples Democratic Party (PDP) under which he contested and won election.

In a statement by the Ekiti State APC Publicity Secretary, Taiwo Olatunbosun, today, Sunday, the party said Fayose should kill any hope of seeking refuge in APC “because he cannot survive in an opposition party.”

Olatunbosun said that the Governor is always seeking to be relevant in party politics with his party dominating at the centre to enable him get away with his many cases of illegality and lawless conducts.

“Fayose has been jittery and confused since the PDP lost Ondo State to the ruling APC against all odds and calculations and as a political gambler, who has traversed many parties since 2003 till present, starting from the PDP to APGA, Labour party, romanced briefly with ACN and PPA before moving back to the PDP even as he romanced AD in the last week governorship election, he is at his wits again to save his skin.

“Sensing that PDP is in the throes of death, he is contemplating dumping the party for APC, but there is no place for him in APC as he is only looking for an escape route from prosecution for his various infractions on the law since his first aborted tenure as governor,” he explained.

However, governor Fayose had since debunked the insinuation that he was contemplating leaving PDP if by 2018, the crisis in the party is not resolved.

Fayose had said: “what I said is that if the current man-made crisis rocking the PDP persists till 2018, rather than allow them mess us up like they did in Ondo, we may have to seek an alternative and credible platform.

“Why should I leave the PDP and join a party of hunger like APC? Ekiti is different from Ondo. By the grace of God, there will be a repeat of history here in 2018. I shall repeat the 16-0 that I gave them in 2014.” [myad]