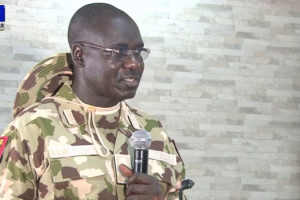 The Nigeria Chief of Army Staff, Lieutenant General Tukur Yusuf Buratai has made it clear to the soldiers in war front with Boko Haram insurgents that they either end the remnant of the insurgents in this December or prepare to live with their antics for a long time.

Buratai, who spoke to the troops of the Operation Lafiya Dole in Borno state as the Christmas and New Year festivities approach said: I wish to reiterate that December is a month of decision. It is either we succeed in clearing the remnants of Boko Haram terrorists or we continue to live in perpetual circle of their atrocities in the North East.

“I hereby want to reassure all troops that I intend to return everybody back to Barracks in 2017 only leaving behind a strong, highly mobile, effective and motivated force that will continue to do the good work that we have already started. In this regard we shall also bring reassurances to the populace as normalcy finally returns to the area.”

Buratai, who sent his best wishes to the troops of Operation LAFIYA DOLE as the Yuletide period approaches, commended them for their sacrifices, commitment, loyalty and courage in the service of our fatherland.

“I wish to make this call to action and wake up call to you all and to emphasize that we must immediately begin to embark on the final aggressive action and comprehensive sweep of the operational theatre with a view to ending the operation on a very high note. In this regard, no stone should be left unturned. I therefore call on all officers and soldiers to buckle up and ensure that remnants of Boko Haram terrorists are completely cleared.

“I hope to be with you sometime this month to motivate and positively influence the ongoing operations. This is with a view to having a colourful end of year and peaceful Yuletide in the North East and indeed Nigeria. I urge all commanders to plan and embark on effective patrols, raids, ambushes and deliberate attacks in conjunction with other Services especially the Nigerian Air Force and Nigerian Navy to rescue all those abducted by the terrorists.

“I also wish to remind all troops that captured and surrendered Boko Haram terrorists must be treated humanely and fairly and in strict accordance with the provisions of International Humanitarian Law and Laws of Armed Conflict. In doing so, we must be prepared to enter all fortresses, camps, dens and enclaves of the Boko Haram to completely flush them out and dominate these areas to ensure they are not reoccupied.”

The Army Chief called  on all the troops to remain focused, disciplined, loyal, dedicated and patriotic to their duties and to the President and Commander-in-Chief of the Armed Forces of the Federal Republic of Nigeria. [myad]