Home FEATURES Ayo Fayose Is Sick In The Head! By Emmanuel Uchenna Ugwu 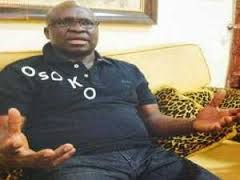 Ayo Fayose embodies all the key indicators of aggravated mental meltdown – he has cast off all sense of restraint, he is actuated by an insatiable urge to embarrass himself in public, his utterances run like a surging stream of folly, and he finds delectation in the headshaking attention that his shameful stunts earn him!

So there is possibly no way to frame Fayose’s condition nicely. No way to make it sound tame and politically correct. It must be said as it is: simply and plainly – without a touch of varnish. And this is it: this rascal who insists on making sports of his nakedness, this pretender to the seat of Governor of Ekiti State, Ayo Fayose, is sick in the head.

Fayose, who the other day, felt compelled to assert his education by brandishing all the paper qualifications he has ever garnered, from primary school to the polytechnic, before a televised campaign rally, is not a medic. Even his claim to basic literacy is suspect because he has proved unable to appreciate a simple reading of the constitution on the count of majority in the Nigerian legislature.

Yet he has sworn himself to pronouncing upon the health of his pet hate, Citizen Muhammadu Buhari, and branding the APC Presidential Candidate as the sickest and sickliest Nigerian, the ripest fruit about to fall.

Ayo Fayose is not quite a new discovery. He has always been Ayo Fayose. His maiden tenure as Ekiti Governor, a tenure that had to be abbreviated by a very urgent impeachment, was a tragedy. Fayose did not excel in any sphere of governance. And certainly, he was no healthcare champion. He could only be justly credited with doing an excellent job of defining himself as a man confused by the habitat of power. He made himself the poster boy of rascality; of delinquent leadership. He wound up scamming the state in the name of a poultry farm.

When he launched a bid for his second advent, Fayose affected to have undergone an inward Transformation. He called in the posture and self-abasing confessions of a remorseful prodigal son seeking to have the runs of his old residence. Many people risked a bet on his affectation of repentance. After all, his outcast blackout should have mellowed his vintage.

Fayose returned. And he has been supplying evidence that the passage of years has only served to crystallize his capacity for leisurely nuisance. The truth subsists in the paradox: the child is the father of the man.

As the viral audiotape reveals, Ekiti people did not demand a Fayose encore. It was actually the veto of toy soldiers that trumped the vote of the citizens. A compromised detachment of the Nigerian Army smuggled Fayose back into power.

We gather from the proceedings of the conspiracy that the electoral coup originated from the person of President Jonathan. Fayose, beneficiary of the successful putsch, is indebted to the man who made him. And in this crucial moment, when the prospect of Jonathan’s re-election is gloomy, Fayose, is in a lather; pressed by good memory, to repay yesterday’s kindness.

Being more inclined to rashness than sobriety, Fayose might have been in a quandary. How could he distinguish himself from the pack? How could he out-compete others in the Jonathan supporters’ club – all those exercising themselves, striving to be decorated the loudest supporter, the most loyal chieftain, the most dreaded ex-militant who cannot bear to experience the defeat of his man in the field of play?

What to do? Not an ingenious thinker and not one to staff his deficiency, he elected to exploit his bad genius. He would just be the most odious of them all. In the name of Jonathan, he would begin to shock everybody, and he would go beyond what any man of good breeding or sensibility would be loath to attempt!

And Fayose has largely succeeded. He has become the hooligan of the hour. He is now the gold standard for aberrant campaigning. And yes- he has procured name recognition for cultivating infamy.

He started off by appropriating the front pages of some newspapers and plastered them with a death wish. He warned, from the spring of clairvoyant powers, of a countdown to Buhari’s certain demise. We dare not give our thumbprint to a condemned man and incur on ourselves the expenditure of a state funeral. He even tagged on a verse of the scriptures, an overt hint that he derived the oracular mandate to publish the postdated obituary from the Godhead.

Fayose, the man who is privy to the schedule of visitation of the harvest of the Grim Reaper, the man who knows the next new corpse on the block, missed out something.

See also:  What A Donald Trump Win Will Mean For Nigeria, Africa

He did not provide a valid counterbalancing reason to embrace the option named Jonathan. Like a warranty for candidate Jonathan. Since his sole agenda is to scare us with the monumental revelation that Candidate Buhari is running for President without first conquering mortality, it would have made sense to guarantee, with the confidence of God’s self-appointed regent, that Jonathan shall see neither sickness nor death.

Fayose has yet to undertake that Jonathan has life and life in abundance. He hasn’t quoted how many birthdays that must pass before Jonathan is due. Perhaps he has not bothered to read the expiry date off Jona’s forehead.

Fayose, the relentless stalker, continues to pursue the health of a man who is leading a normal life and prosecuting a rigorous campaign. Fayose and his ilk would rather have Buhari incapacitated in the run up to the elections so that the 2015 Presidential race will be a veritable solo contest for the incumbent – a Na Only You Waka Come farce.

Their malicious desire, unfulfilled and stubborn, burns within them. Buhari travelled across the states. He showed up at all the rallies and addressed his teeming supporters. And Buhari continues to maintain a busy itinerary. He keeps his appointments, travels overseas to confer with dignitaries and address foreign audience.

The person who has a real problem is Fayose himself. His temperament makes him a mass of obligate restlessness. He cannot sit down and content himself with doing the job he ostensibly campaigned for. He cannot get himself to leap to the level of seriousness required of an occupant of the office of Governor. He would rather fret over far-off apparitions than apply himself to solving concrete issues in his environment.

Most likely, Fayose finds the job boring. And I volunteer to counsel that he doesn’t have to remain stuck. There is an exit. He could resign and make way for somebody who will use the station to tackle the many social woes of everyday people that Fayose cannot see because of his Buhari fetish.

His replacement would then dive into Ekiti problems. He would be burdened with thoughts of serving life changing deliverables: filling the first cup of potable water in one remote village, sending an agricultural extension graduate to teach a struggling widow how to achieve higher maize yield, making an electric bulb shine in a hut so that the study of young boy who has the audacity to dream he would someday become a pilot may stretch a little more into the night.

We look at Fayose and wonder whether a fraction of his supposed love for heath reflects on Ekiti. Has he articulated and crafted a universal healthcare bill, say Fayosecare, to expand access to modern day medicine? Has he budgeted for cottage hospitals in communities where the sick have to choose between staking their survival on the potency of a foul smelling herbal concoction or a bottle of holy water?

Has Fayose proposed Ekiti Cancer Diagnostic Center yet? Does he have a model of the building sitting on his desk?

Fayose thinks that cancer has exclusive fondness for opposition Presidential candidates. He needs to know that Ekiti Government House is not free of cancer bearers. Among the aides and courtiers in his orbit, we can hit at least a dozen humans who need chemotherapy but are walking about in ignorant bliss.

We know Fayose wants to win the gold medal. He wants to be decorated the most ardent Jonathan fanatic. But Fayose would be better off focusing his efforts on mastering the ill health of his own people rather than burn himself out on a Buhari who can take care of himself comfortably. Fayose needs to know that the number one killer disease in his domain is not the ominously sounding cancer but ‘’ordinary’’ malaria. And his kith and kin could use a Governor’s passion for healthcare.

Or if he is not blessed with the gift of compassion, would he not look after number one?

Even Fayose’s favorite reference book, the Bible, recommends positive selfishness: remove the log in your own eyes before offering unsolicited ophthalmology practice on a stranger.

The interaction of Buhari Phobia and Buhari Paranoia has subtracted so much from Fayose’s sanity as to make him a good case for psychiatric redemption!

PUBLIC NOTICE ON THE RECOVERY OF OUTSTANDING TAXES FROM TAXPAYERS