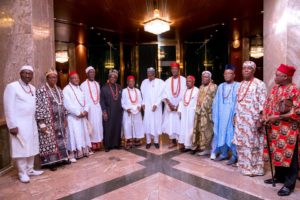 President Muhammadu Buhari has said that those who are agitating for another country out of Nigeria, like the Biafran Republic, are wasting the time they should have given to developing Nigeria as a country.

The President, who spoke when he received in audience today at the Aso Villa Presidential Villa, Abuja, members of the Council of South-East Traditional Rulers, warned that the question of having another country out of Nigeria was misplaced.

“The question of having another country out of Nigeria is going to be very difficult.  From 1914, we have more than 200 cultures living with one another.

“God had endowed this country with natural resources and talented people.  We should concentrate on these and be very productive.”

Addressing specific issues raised in the address by the traditional rulers, the President gave assurance that the South-East will also benefit from the new railway architecture being put in place by his administration.

On their request for more representation for the South-East in his government, the President said that he was “very conscious of the sensitivities of the South East”, on account of which, he gave the region’s four out of five states Senior ranking Ministers in the Federal Cabinet.

President Buhari used the occasion to appreciate the good work of the Ministers from the region in the federal government, saying that they are doing very well for the country.

See also:  I Have Nowhere To Go if Nigeria Breaks Up - Tinubu

He appealed to the traditional rulers from the South East to persuade their people to give his government a chance and to continue to serve as beacons of culture and traditions of their people.

The President assured the delegation that kidnapping and cattle rustling, which he described as “unfortunate” will be the government’s next target, now that “we have managed to calm down the North-East.”

President Buhari noted the profuse commendation for his administration’s war against corruption and insecurity by the traditional rulers.

He expressed frustration at the endless nature of some ongoing trials, citing some of the cases as going far back to the tenure of former President Olusegun Obasanjo.

“We are asking the judiciary to clean itself. Nigerians are tired of waiting. They want some actions.”

The President hoped that the Acting Chief Justice of Nigeria and Attorney-General of the Federation will come to some form of agreement by which specially designated courts will give accelerated hearing to some corruption cases that are pending.

“We want Nigerians to know we are serious.” [myad]