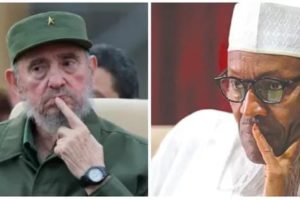 President Muhammadu Buhari has described the former Cuban leader, Fidel Castro who died yesterday, as a remarkable selfless global leader.
In a condolence message to the people and government of Cuba, President Buhari said that he received the news of his death with profound sadness.
The President, who described late Fidel Castro as the Cuba’s longest revolutionary icon, expressed deepest condolences to Cuban President Raul Castro.
“I commiserate with the people of Cuba on the passing, early Saturday, of the legendary leader, who passionately served his people for almost half a century.”
The President said that Castro was remarkable leader who against all odds, stirred uncommon development in sports, education and healthcare sectors of his nation, even to the benefit of other nations.
He also expressed happiness that Fidel Castro lived to see improved ties with the United States, saying that he was a great friend to Africa, countries in the Global South and the Non-Aligned Movement. President Buhari said that Castro’s place in history is assured, given his sustained successful commitment and towering role in the liberation and anti-colonialism struggles in Africa.
He said that his prayers and thoughts are with Castro’s family, friends and many admirers as they go through this period of national mourning “and exit of a truly admired selfless global leader.” [myad]