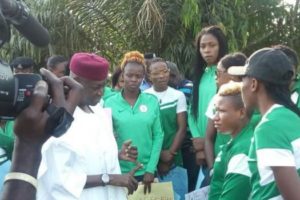 President Muhammadu Buhari has given directive to the Federal Ministry of Sports to immediately pay all the outstanding entitlements of the Super Falcons who had the cause earlier in the day, Wednesday, to march to the National Assembly to protest the delay in the payment of their entitlements, amounting to $24,000.

Addressing State House Correspondents after interacting with the team, Kyari said the Falcons have done the nation proud and deserve to earn all their allowances.

Kyari said: “The problem has been resolved. They have done us proud and we congratulated them.