Home FEATURES Buhari To Pope Francis: We Appreciate Your Peace-Making Efforts Across The World 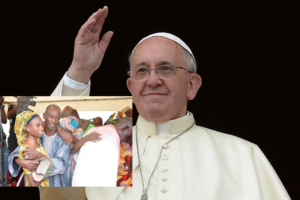 President Muhammadu Buhari has asked Archbishop Augustine Kasujja, Apostolic Nuncio (Ambassador of the Holy See) to tell Pope Francis that Nigerians appreciate his efforts at bringing peace to all parts of the world.
The President, who spoke at a farewell visit by Archbishop Augustine at Aso Villa, Abuja today, Thursday, acknowledged the contribution of Pope Francis and the Holy See to global peace, describing it as “active and relentless.”
Buhari said that the effort of the Pope for peace, especially in Syria, is inspiring and impressive, adding: “please convey our gratitude to the Pope. We thank the Vatican for supporting Nigeria’s efforts. You have spent over six years here. We hope you will keep in touch.”
This was even as Archbishop Kasujja acknowledged what he called “the courage of Nigerians.”
He said that despite the devastation by Boko Haram, people in the North-east have remained resilience and unbowed.
He said that he visited all parts of the country in his almost seven years’ stay.
“If you permit me, I will love to be an ambassador of Nigeria wherever I go.”
The Apostolic Nuncio said he found Nigeria fascinating, and his tour of duty quite fulfilling and rewarding.  [myad]