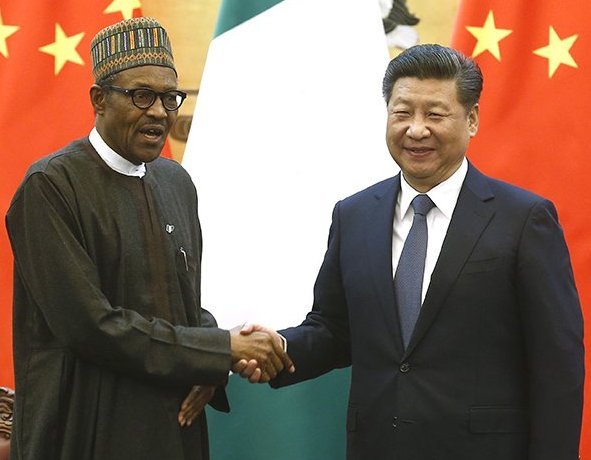 He said that Nigeria and China also signed a Memorandum of Understanding for the One Belt One Road Initiative (OBOR).

According to Garba Shehu, Nigeria’s Minister of Foreign Affairs Geoffrey Onyeama and He Lifeng, Director, China’s National Development and Reform Commission signed the OBOR- an initiative of President Xi which focuses on improving connectivity and cooperation among multiple countries spread across the continents of Asia, Africa and Europe.

He said that earlier during his meeting with President Xi, the Nigerian leader, while commending the Chinese government for successfully hosting the Forum on China-Africa Cooperation (FOCAC) solicited support for the Mambilla hydropower project.

President Buhari told his Chinese counterpart that since his last visit to China in 2016, the brotherly relationship between both countries had continued to flourish.

According to the President, ‘‘in the past 24 months, the Chinese Government has provided humanitarian aid to our conflict-affected areas, scholarship to Nigerian youth, military training and security support to our personnel and agricultural modernization training.’’

President Buhari noted that in the period under review, China had provided concessionary loans to fund critical infrastructure projects in Nigeria, adding that these interventions have positively impacted millions of Nigerians and will continue to do so for generations to come.

‘‘Mr President, as we celebrate these successes, I would like to once again solicit your support for the Mambilla Hydropower Project which remains a key priority for my government. Our hope is to fund the project with concessionary loans from China as any alternative funding arrangement will adversely impact the project’s viability.

‘‘We have been informed that our submission on this project is undergoing assessment by the relevant Chinese agencies. We hope with your kind intervention, this assessment will be expedited. Your Excellency, Mambilla is Nigeria’s equivalent of the three gorges dam. My wish is that you join me for the groundbreaking ceremony of this project in the not too distant future,’’ President Buhari said.

On Lake Chad Basin, the President thanked China for accepting to support the international efforts to recharge the Lake.

‘‘The inclusion of this project in the FOCAC Action Plan 2019 to 2021 will go a long way in supporting our efforts to rehabilitate and resettle the conflict-impacted North East region,’’ he said.

On people-to-people relations, President Buhari told his host that in the course of his visit, he interacted with Nigerian students and entrepreneurs living in different parts of China.

‘‘I was very pleased to hear about the positive experiences these hard working and law abiding citizens are having in their host communities. I also had the pleasure of meeting young Chinese students learning three Nigerian languages.

‘‘We must continue to support such exchange programmes to enhance our people-to-people contacts,’’ he said.

‘‘Since our last meeting two years ago, Nigeria has relaxed its visa requirements to Chinese citizens. Today, I am pleased to inform Your Excellency that Chinese citizens receive Nigerian visas in less than 48 hours.

‘‘Another measure that will improve our trade volumes will be to introduce import duty waivers on Nigeria’s commodity exports to China. Today, our commodities such as sesame seeds, hibiscus and cassava amongst others attract import duty in China,’’ he said.

The Nigerian leader also lauded China’s support for two permanent seats for Africa at the United Nations, noting that the reform of the Security Council would ensure equitable representation for the continent.

In his remarks, President Xi who commended Nigeria’s fight against terrorism and the progress that has been made so far, promised China’s support in capacity building and intelligence sharing.

He also pledged 50 million Chinese Yuan support to Nigeria’s military, noting that ‘‘Buhari is as decisive in dealing with terrorism as China.’’

‘‘The relationship between Nigeria and China is as best as ever, especially given the deepening mutual trust. China will continue to stand with Nigeria,’’ he said.

On Mambilla, the Chinese leader told President Buhari: ‘‘We understand how critical the project is to your country and we will take a serious look at it and ensure that it succeeds because of its social and economic benefits.’’