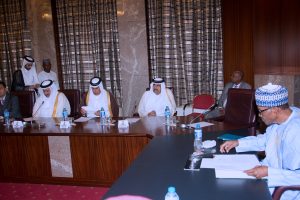 The former Prime Minister of the State of Qatar and Emir, Sheikh Hamad Bin Khalifa Al-Thani has said that the global opinion on Nigeria as an investment destination had been boosted by President Muhammadu Buhari’s strong standing against corruption and adherence to the rule of law.

Sheikh Hamad Bin Khalifa Al-Thani made the remarks today, Thursday, when he led a Qatari business delegation on a visit to the Nigerian leader at the Presidential Villa, Abuja.

He pledged that members of the delegation and the government of Qatar are interested in investing in Nigeria’s oil, railway, aviation and power sectors.

This was even as President Buhari narrated the successes which his government’s diversification in the nation’s economy, from oil, has attained even as he appreciated moves by foreign private invest mentors to increase investments in Nigeria.

President Buhari said that his government’s policy of diversification in the economy has, in the past two years, turned Nigeria into one of the most attractive investment destinations in Africa.

“My administration’s economic agenda has always been to move away from over reliance on crude oil and food importation.  Nigeria is a blessed country.  We have fertile land.  We have young and energetic population.  And we have a very strong legal and regulatory system that protects capital and investments, both local and foreign.

“As you are aware, Nigeria just exited its worst recession in more than two decades.  We have more than doubled our foreign reserves.  We are winning the war against corruption.  We are developing our infrastructure.  And we are enforcing the rule of law.  As a result of this, we are seeing significant growth in the non-oil sector which is creating thousands of jobs across the country.”

The President cited the current strategic partnership between Moroccan and Nigerian fertilizer companies as part of the success stories.

“Today, due to this alliance, Nigeria has over 13 functioning fertilizer blending plants with another four in the pipeline.  This is purely driven by the private sector.

“In 2017 alone, we saw significant commitments and agreements by major global organisations in infrastructure projects such as: the proposed USD 9 billion Dangote Refinery and Petrochemical complex in Lagos; the completed USD 600 million Lafarge Plant in Calabar; the proposed rail stock; the proposed USD 1.3 billion public private partnership with General Electric on Rail Track Development and the proposed ENI/Agip rehabilitation of Port Harcourt Refinery. You can see clearly that foreign private companies are coming back to Nigeria and making massive investments within our existing legal and regulatory frameworks.” [myad]