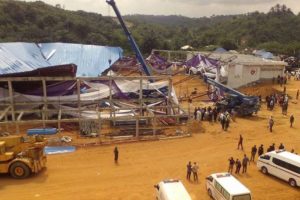 The Reigners Bible Church building in Uyo, Akwa Ibom State collapsed today, Saturday,  just as service was in session, killing no fewer than 50 people even as the state governor, Udom Emmanuel who was in the church escaped unhurt.
Reports reaching us from Uyo said that rescue workers have been battling to evacuate victims, whose number is yet to be ascertained.

Authorities did not provide any reasons for the collapse of the church building but said efforts were underway to rescue victims trapped beneath the rubble.

Official of the government said that the church “caved around them” at a ceremony to consecrate the leader of the church, Pastor Akan Week, as a Bishop.
In a statement immediately after the incidence, government Udom expressed sympathy for the families of victims, saying that a high- Powered panel of enquiry is being constituted to ascertain the immediate and remote factors leading to the collapse of the church building with a view to forestall the re-occurrence of such incident and bring to book persons found to have compromised professional standards in the construction of the building.
Governor Udom, who confirmed that he was present at the church during the incident, said that he personally supervised rescue operations and evacuation of the injured to the hospital.

He assured the victims that the State Government will undertake their medical treatment even as he appealed to the citizens of the state to remain calm, pray for the injured and avoid undue speculation as the situation is being given the best possible attention. [myad]