Home FEATURES Death Of Arisekola Throws Ibadan Into Mourning, As Atiku Venerates Him 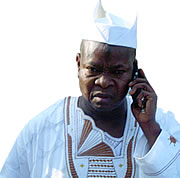 The death of a businessman and Islamic leader, Alhaji AbdulAzeez Arisekola Alao, today, threw the people of Ibadan into mourning even as the former Nigeria’s Vice President, Atiku Abubakar described him as a colourful and astute businessman that was passionate about Nigeria.

The Aare Musilimi of Yoruba land died today in a London hospital at the age of 69.

Most of the residents of the ancient city were petrified when the news of his death was broken through his eldest daughter, Khadijat.

Arisekola was said to be a hugely successful business, and was also deeply respected as a Muslim leader. He was Deputy President-General of the Nigeria Supreme Council for Islamic Affairs and the Aare Musulumi of Yorubaland.

In a condolence message emanating from his media office in Abuja, the former Vice President said that the demise of Aare Musulumi of Yorubaland was a loss to Nigeria, adding that the death actually shocked and saddened him.

“Arisekola was a devout Muslim and community leader. He was generous and loved his people; the quality of his humanity and compassion was unprecedented. The country will surely miss him,” Atiku said.

“I visited him recently after the death of his wife and he hosted me to lunch in his palatial Ibadan home. He related well with all Nigerians,” the Turakin Adamawa recalled.

He expressed his condolences to the family and people and government of Oyo state over the loss.