Home FEATURES Despite Government’s Kindness, We Want To Go Back Home – Abuja IDPs 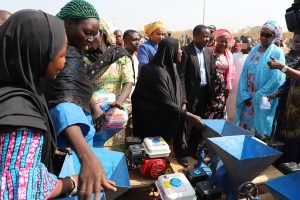 Internally Displaces Persons (IDPs), who are mainly victims of the Boko Haram attacks in the Northeast, have expressed appreciation to the Federal Government on efforts being made towards making the camps safe but stressed that they are eager to return to their various homes in the Northeast and other parts of the country.

Leader of the victims in the IDP’s camp at Kuchigoro in the Federal Capital Territory, Abuja, Mr. Philemon Emmanuel made this point over the weekend during the delivery of food, non-food items, empowerment and educational materials in the camp by the National Commission for Refugees, Migrants  and Internally Displaced Persons.

According to Emmanuel, “we do appreciate all the efforts to make the camps comfortable for us through the donations and several visits by concerned people from within and outside the country, we have been missing home and we will want to beg that government should intensify efforts towards making out places safe so we can return home.

“We have been shown that humanity cares for us through the regular gifts we get here, but we have been disconnected from our roots and majority of us here will want to return to out ancestral lands because there is no place like home.”

He appealed to those coming with gifts to the camp to pay attention to their medical needs, saying: “among the several gifts we have gotten on this camp is the medical clinic donated by the German government but there are no drugs in the clinic.

“We have a nurse who has volunteered to render free services to us here, but there are no drugs for treating our simple medical challenges that come up from time to time.

“Having stayed out here without any gainful employment over the years, we will also want to appeal to government and those who can assist us to consider us for employment opportunities so that we can return to normal family lives.

“We have graduates among us who were engaged in some professional duties before the killers came yo ragas our lands and turned us to a people who depend on others to survive.

“If such people are employed, we will surely have less tension on the camp,” Emmanuel told the visitors.

Speaking earlier, Federal Commissioner, National Commission for Refugees, Migrants  and Internally Displaced Persons, Hajia Sadiya Farouk promised the the Federal Government will continue to partner with donor agencies and public spirited individuals to alleviate the suffering of the victims of skirmishes across the country while intensifying efforts towards making everywhere safe in the country.

“Out concern for the provision of durable solutions is to out an end to those activities that can temporarily of permanently bring about displacement, such as assisting displaced persons to return to their habitual residence when it becomes possible and safe; reintegrate them in host communities as well as resettle or relocate them elsewhere in safer areas.

Earlier, Hajiya Farouk had led a delegation yo make similar donations were  at the Wasa and Durumi camps where the camp coordinators collected the items to be shared according to the laid down regulations for such donations in the camps. [myad]

Once Upon A Time, 27 Emirs Ran Away From Their Domains, Shehu Of Borno Tells Buhari