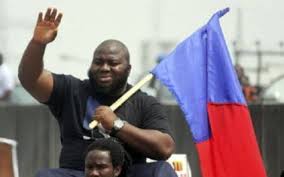 I do not like responding to Asari Dokubo’s frequent unguarded rants and vituperations for the mere fact that silence is the best answer given to a fool. However, his recent call to arms in a meeting of some so-called ex-militants in Bayelsa is one that should be given a response, since the appropriate authorities

I do not like responding to Asari Dokubo’s frequent unguarded rants and vituperations for the mere fact that silence is the best answer given to a fool. However, his recent call to arms in a meeting of some so-called ex-militants in Bayelsa is one that should be given a response, since the appropriate authorities (DSS, NPF, etc) have failed to respond. By the way, in Nigeria, under President Jonathan, an ex-militant is more honoured, revered, and dreaded than an ex-soldier.

In the beginning, President Jonathan’s supporters tried to play the religious card by branding General Muhammadu Buhari a bigot but it didn’t sell. They tried to write him off in the eyes of Nigerians on account of his age… that failed too. Next was his educational qualification. They embarked on a fruitless effort to discredit the APC presidential candidate by alleging that the retired General of the Nigerian army who once headed the Supreme Military Council does not possess a Leaving School Certificate. They made so much hue and cry over Buhari’s certificate issue that one would think they had forgotten the road to the court. That effort also failed.

Alas, after exhausting all tactics and antics available to them to sway public opinion against Buhari, the supporters of Goodluck Jonathan, are now openly threatening violence should their man loose out in the February 14 presidential election, whether or not the entire electoral process is free, fair and credible. In other words, their own shallow understanding of democracy is that everyone “must” vote for Goodluck Jonathan, despite the fact that his failure in all ramifications of governance is unparalleled in the history of Nigeria.

There are a few issues I like to underscore from this evil declaration.

Firstly, where is Marilyn Ogar, the spokeswoman of the PDP… sorry, DSS? Only a few days after the Abuja peace accord, and some disgruntled individuals headed by an orangutan called Asari Dokubo are already threatening war should their candidate loose out in the election, and the security agencies in the country are not paying any attention to it. If the Abuja peace accord, which had the buy-in of the National Security Adviser and the Commander-In-Chief himself, was anything to go by, one would have expected that Asari Dokubo, Tompolo, Boyloaf, and the other empty vessels who are part of that infamous Yenagoa declaration should by now be in the custody of security agencies writing statements, at the least. Indeed, one would have expected the operatives of the DSS to swing into action with the same level of swiftness with which they invaded the APC data office in Lagos.

Secondly, this early and unwarranted threat of war is a clear indication that Goodluck Jonathan and his supporters have conceded defeat even before the day of the election. Otherwise, if they were confident of victory, there would have been absolutely no need gathering in that coven where they issued that call to arms. My advice for them is that they should not forget they have consented to an amnesty deal. Therefore any resort to arms ever again would mean that they would be exterminated like flies by government security forces and heaven will not fall. It is a deal they willingly agreed to, and they just cannot eat their cake and have it.

Thirdly and finally, I like to urge my fellow Nigerians who earnestly yearn for change not to be intimidated by these opportunistic ethnic jingoists, but to take them for who they truly are: empty vessels known for making the loudest noise.

Goodluck Jonathan has been given a fair opportunity to serve at the highest level in this country, and he bungled it. He made a barrage of promises during his 2011 campaigns. And now in 2015, four years after, instead of giving us an account of his stewardship by telling us how much of his promises he has been able to fulfill so that we can on that basis assess his performance and decide whether to retain him for another four years or kick him out, he is busy going round the country making a fresh set of promises, most of which are clearly unrealistic (like creating two million jobs per annum for the next four years if re-elected, when he couldn’t create that amount of jobs for the entire six years he has been at the head of government).

God-willing, elections will hold as scheduled by INEC, Goodluck Ebele Jonathan will be beaten black and blue in a fair contest, and the only redeeming path that will be left for him to take will be to congratulate the winner, General Muhammadu Buhari.

If Asari and his co-miscreants try anything stupid, they will be effectively shackled and caged, even to the delight and relief of their own kinsmen whom they have been brutally lording over.

Asari has been thrown into prison before by President Obasanjo. But for the magnanimity of President Yar’Adua of blessed memory, he probably would have expired there. I am as much a South-Southernern and a Niger-Deltan like him and his fellows. I hail from Edo State, and I was born and raised in Warri, Delta State. I make bold to say that change in Nigeria is not only possible, but inevitable! No amount of threat can stop us from achieving it, not even from Asari Dokubo multiplied by a thousand and all the Niger-Delta criminals benefitting from illicit contracts from the inept Jonathan-led government put together.

I reiterate, come February 14th, Goodluck Jonathan will be defeated by the ballots, and not even the bullets will be able to save him.