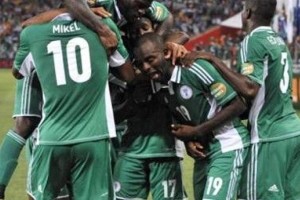 Nigeria national football team, the Super Eagles, inched towards the 2018 World Cup in Russia as they beat their Algerian counterparts today, Saturday in Uyo, capital of Akwa Ibom State by 3 goals to one. This was even as President Muhammadu Buhari hailed them for the beautiful outing.

It was the Chelsea pair of Victor Moses and Mikel John Obi who put Nigeria ahead in the Nigeria’s campaign to qualify for the World Cup.

Moses opened the scoring for the home side after he latched onto the ball and made his way towards the box in the 25th minute. He attempted to pass the ball but it rebounded off a defender, even as the winger regained possession and rounded his marker before driving in a low shot into the back of the net.
His Chelsea teammate, Obi then doubled Nigeria’s advantage three minutes before the break after receiving a through-ball and firing in from close range with the Algeria defence attempting, unsuccessfully, to appeal for offside.
The goal stood, though, with Obi appearing to be onside before Schalke’s on-loan Tottenham midfielder, Nabil Bentaleb, brought Algeria back into the game with his stunning long-range strike in the 67th minute.
But an unmarked Moses struck again in added time after driving in Ahmed Musa’s pass from the right to end the contest 3-1, which ensures Nigeria extend their lead at the top of Group B to six points, four more than second-placed Cameroon.

A statement by the senior special assistant to the President on media and publicity, Malam Garba Shehu,  immediately after the match, quoted Buhari as describing the 3 -1 victory of the Super Eagles against Algeria as the height of patriotism and professionalism

President Buhari celebrated what he called “the very-much improved national team for meeting our expectations during the entertaining and action-soaked encounter.”

The President commended the team and its handlers for displaying uncommon strength, determination and high professionalism in the onward and steady progress to the 2018 tournament in Russia.

He gave assurance that “with six points in our kitty from two impressive wins, the Federal Government and indeed all Nigerians will continue to support them to make the nation proud.

The President also commended the Akwa-Ibom State government for hosting the match and the fans for their good conduct and sportsmanship throughout the game. [myad]