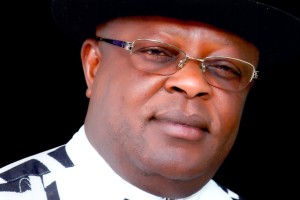 Governor David Umahi of Ebonyi State has said that he would pay one month salary bonus  as part of his Christmas package to workers.

Governor Umahi, who was on a visit to the Ebonyi State University permanent site in  Ezzamgbo,  said that in spite of the recession in the country and the fact that the state is one of the lowest  recipients of federal allocations, his administration was determined to improve the lot of its workers.

He said that junior workers would receive 100 per cent bonus while the senior  workers would get 50 percent, even as he challenged the university authorities to emulate his administration by paying salaries on or before 20th of every month.

He said that his administration would also put smile on the faces of the university workers during the Christmas period.

The governor announced the donation of a bag of rice each to all staff of the university  and  N5 million to be shared by them .

He also gave  3,000 bags of rice and N10 million to  the students as their Christmas gifts and  donated two buses to the Students Union Government for easy transportation of students  to their various campuses.

Governor Umahi said that the  state House of Assembly had already given approval for sums to be spent on the largesse, stressing that his government  is not owing workers salaries.

He said that his administration’s plan to begin immediate payment of gratuity arrears owed by both local and state governments since 1993 amounting to  N8bn.
The governor, who expressed dismay that civil servants found it difficult to pay their retired colleagues their pensions but would want to be paid when they retired, said the  payment of gratuities would begin this month with the families of retirees who are now late.
“We are not owing anybody pension in Ebonyi State. Gratuity is owed since 1993 and gratuity for both local  and state governments is over N8bn but the funny thing is that when you seat as a civil servants,you refuse to pay others their gratuities and when you now leave, you start insisting, we should pay gratuity.

“So, for those we have owed gratuity for a very long time;we are expecting a miracle. What we want to do for our brothers and sisters that were not paid gratuities and they are dead, we intend to look at them and  see how we can pay off their gratuities through their families and we hope to do it this December.
“We also want to pay everyone that has retired 10 per cent of whatever we owe him/her in the name of pension and other allowances.”