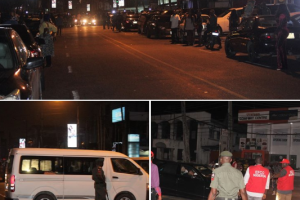 Operatives of the Economic and Financial Crimes Commission (EFCC), today, Friday, raided a popular nightclub 57 in Ikoyi area of Lagos and arrested no fewer than 12 suspected internet fraudsters known as yahoo yahoo boys.

The Lagos division of the EFCC said in a statement, today, Friday, that the suspected fraudsters were arrested at the popular club, located at number 57 Awolowo Road, Ikoyi, and is a popular celebrity hangout.

“While some of the suspects abandoned their exotic cars to avoid arrest, some others put up resistance, thereby turning the environment into a war-like zone of sorts.

“However, a total 10 cars were recovered from the suspects during the raid that lasted about three hours.

“The suspects will soon be charged to court when investigations are concluded.” [myad]