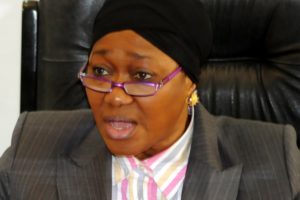 A former Chairman of the Economic and Financial Crimes Commission, EFCC, Mrs. Farida Waziri has accused her predecessor, Nuhu Ribadu as a political prostitute that jumped from one political party to another.

“I equally suspect that Nuhu may sooner than later blame me for his penchant to jump from one party to the party like a political prostitute; from the defunct Action Congress of Nigeria (ACN) to PDP and now to All Progressives Congress (APC).

“It is his lust for power, inordinate ambition and desperation for political relevance that continue to push him to dine and wine, and even enjoy the wealth of those he had labeled as corrupt in yesteryears.”

Farida, who was reacting to Nuhu Ribadu’s earlier reference to her as the cause of his political misfortune, having lost the 2015 governorship candidate of the Peoples Democratic Party (PDP) in Adamawa State, said that Ribadu could not hold her responsible for his double face, lack of principle and complex contradictions in his character.

A statement signed by her Personal Assistant, Ms Omolara Oluremi on Saturday in Abuja quoted Farida as accusing Ribadu of being in the habit of dropping her name, warning him to stop using her name anytime he needs public attention or sympathy.

“I know he is always obsessed with dropping my name into his script anytime he needs public pity or political relevance,” Farida.

She said: “my attention has been drawn to a reckless and irresponsible statement credited to Nuhu Ribadu at a function on Wednesday in Abuja, where he, as has been his rhetoric since 2008 when I succeeded him as the EFCC Chairman, attempted to malign me by accusing me of being part of his imaginary enemies who frustrated the nation’s anti-graft war.

“My first inclination was to ignore Nuhu Ribadu since I know he is always obsessed with dropping my name into his script anytime he needs public pity or political relevance but on a second thought I felt I should advise him to leave me out of his frustrations and face life.

“There should be a life after EFCC. If after eight years of being removed as EFCC Chairman, he is yet to move on with life, even after two successive Chairmen had occupied the same seat and moved on with their lives, then his problem may be psychogenic.

“He needs help elsewhere, certainly not from me.

“If Nuhu is yet to face the reality that EFCC is a Federal Government Agency and not a personal estate of anybody eight years after, I find it compelling to remind him.

“Otherwise one day he would wake up to blame me for his defeat in the 2011 presidential election and even his pathetic outing in the 2015 governorship election in Adamawa state despite the slush funds deployed to ensure his victory at the polls.

“There is also the need to remind Nuhu Ribadu that before he succumbs to another logorrhea, he should avail himself a copy of the investigative report on recovered assets during his tenure as EFCC Chairman and use the opportunity of the next naming ceremony or birthday party he is invited to, to explain to Nigerians what happened to billions of funds and assets recovered from suspects under him, with no records or documentation.

“He should be grateful to me that I cleaned his mess by creating an Assets Forfeiture Unit to put the records straight and do things rightly.

“No matter how hard Nuhu tries to obliterate my tenure with his numerous lies, the record of over 450 convictions secured during my three and a half year sojourn in EFCC remains indelible.

“We initiated and commenced work on the permanent office complex of the EFCC sitting on a 5.5 hectares of land along Airport Road, Abuja, in addition to setting up offices in Maiduguri, Borno state and Ibadan, Oyo state to expand the Commission’s scope of operations. I can go on and on, on my achievements.

“I have decided to mention just a few for now to discourage Nuhu from claiming the credit for them when next he wants to make himself happy or seek political relevance.

“At this juncture, let me advise Nuhu Ribadu to stop being a weeping man. Garrulity does not heal frustration or depression.

“He may consider vying for a local government chairmanship or councillorship position to get busy so that he can stop spewing falsehood, fables and lies to seek public sympathy and political relevance.” [myad]