Home FEATURES Fayose Has Confirmed He Has Stock Of Army Uniforms In His Possession... 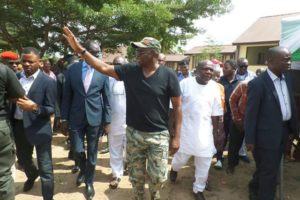 “Wearing army camouflage to the parliament to present the budget has confirmed our earlier claim that Fayose has army uniforms stocked at home with which he unleashed terror on the opposition during the Presidential and National Assembly elections.”

These were the position of the All Progressives Congress (APC) in Ekiti State against the background of Governor Ayodele Fayose’s wearing military uniform to the State House of Assembly on Tuesday to present the 2017 budget proposal.

The party said, which insisted that such attitude represents conduct unbecoming of the Governor’s high position in a constitutional democracy, said: “Fayose keeps his own army in the Government House that he regularly unleashes on his opponents, including using same armed thugs to prevent EFCC from doing its job when the governor stormed Access Bank with thugs to shield Mrs. Fani-Kayode from EFCC scrutiny on her husband’s frozen account.”

In a statement in Ado Ekiti today, Wednesday, by the publicity secretary, Taiwo Olatunbosun, the party frowned at what it called the governor’s contempt for separation of powers as enshrined in the Constitution of the Federal Republic of Nigeria even as it asked the National Assembly to save Nigerian Constitution from the governor’s executive lawlessness and recklessness.

APC said that governor Fayose’s conduct was an affront on the constitution and a brazen conduct suggesting that democracy was dead in Ekiti State.

“We have always insisted that Fayose is a law unto himself and a threat to democracy in Nigeria, showing contempt for the law and would do anything to undermine the integrity of the supremacy of the constitution.

“As a man who has constituted himself as the law, Fayose has demonstrated several times that he has no respect for the nation’s constitutional democracy and the rule of law.

“He sacked the House of Assembly for six months and ran 19 APC members out of the town with thugs and used seven PDP members to impeach APC Speaker in the House of Assembly of 26 members after he led thugs to invade the court to beat a judge and tore court records in the Chief Judge’s office.” [myad]