Home FEATURES Federal Government Was Not Slow In Responding To Case Of Abducted Girls,... 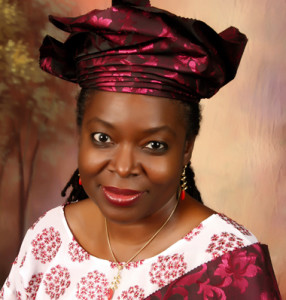 Here is the full text of speech by The Minister of State for the Federal Capital Territory, Mrs. Olajumoke Akinjide on the Occasion of a Visit to State House by #Bring Back Our Girls Campaigners
Thursday, 22nd May, 2014

Good afternoon, my dear brothers and sisters.
As the Minister of State of this great City, Abuja and as a mother like some of you, I, on behalf of Mr. President welcome you all home to the seat of the Federal Government.
The Federal Government is appreciative and supportive of the efforts of your group amongst so many other groups around the world, who have taken out time to demonstrate their disgust and solidarity against the wicked kidnapping of innocent school girls and the senseless mayhem of the Boko Haram terrorists.
Many other groups have sent messages of solidarity and support to the Federal Government in writing and we want to use this opportunity to thank them.
For a government that has placed so much premium on addressing major areas of reform and development in the nation, especially the development of women and the girl-child through increased investment in girl-child education and added opportunity for women, this wicked act has been indeed very painful.
Our present world is under the grip of terrorism. Yesterday, a market in China where ordinary people go to shop was bombed. Two days ago, terrorists visited our beautiful town of Jos and detonated bombs killing scores of people.
The communities of Kano, Maiduguri, Abuja, Nyanya, Madallah, amongst others, have at various times been bombed. Churches, mosques, parks and newspaper houses have not been spared.  Terrorists and their sponsors have brought terrorism to our land. This is sad. This we must resist.
In the last three weeks, our country has been in the spotlight. Some evil individuals who call themselves Boko Haram abducted our daughters, the future mothers of our nation, and have refused to release them. This evil act has sparked protests all over the world. This is as it should be. There must be a united movement for the release of our daughters and that movement must now be turned into a united action against terrorism.
Government has mobilized available resources, Military and diplomatic in the search for our girls who have suffered so much trauma in captivity by agents of terror.
From the very first day this kidnapping occurred the Federal Government took action, directing our security services to go after the abductors.  The search for our daughters has now assumed regional and global proportion and our nation has received strong support from our neighbouring countries and the international community including the United States, China, France, the United Kingdom, among others.
The security forces also reached out to the Borno state government and community members for support and collaboration to bring back our innocent daughters. So far, the campaign to bring our daughters back home is on, and is receiving global support.
Nigeria in collaboration with Chad, Cameroun and Benin Republic have all agreed to establish a single centre for sharing intelligence on the activities of terrorists across our boundaries.
Apart from those efforts in the public space, our President has personally initiated consultations with so many stakeholders, to explore alternative methods of resolving this crisis. It is wrong and most unfair to suggest that there was a slow reaction to this kidnapping. The Commander-in-Chief meets with the security chiefs almost daily, and he is also in constant consultations with regional and global partners on these terrorist threats.
This is why I want to appeal to your group and others through this medium, that it is important that your genuine patriotic zeal is matched with a realistic understanding of the situation in expressing concern and sentiment on this matter and other matters of terrorism.
As early as January 23rd 2013 President Jonathan at Davos, Switzerland asked the world for help in tackling terrorism. He later met with President Obama during the United Nations General Assembly in September of 2013 where he requested for U.S. support.
Government believes that we all must come together to fight terrorism and that protests should be directed at the terrorists who have abducted our innocent daughters and deprived them of a place at the fountain of freedom in our country.
Our security forces are among the best trained in Africa. They are making so much sacrifice in the fight against terror.  As we sleep daily, they are in the field confronting the enemy. They need our support, not attacks and discouragement.
When terrorists see Nigerians turn on each other in blame it gives them a huge morale boost. We must never lose sight of the fact that terrorists are the real enemy.
We would like to encourage civil society groups to use their influence to encourage Nigerians to supply useful information to the security services using the emergency number 112. Citizens must protect citizens if our civilization is to prosper.
We must be careful not to politicize the campaign against terrorism. When a bomb goes off in Kabul, Afghanistan, the people of Afghanistan do not blame the government, they blame the terrorists. When a bomb goes off in Baghdad, Iraq, the people of Iraq do not blame the government, they blame the terrorists. When a bomb goes off in Islamabad, Pakistan, the people of Pakistan do not blame the government, they blame the terrorists. When a bomb goes off in Nigeria, we must all unite to fight the terrorists. This is the task of this generation. Our daughters must be freed to come home to their parents and loved ones.
Our daughters must be freed so that they can return to school and receive their education.  Our daughters must be freed so that they can return home to be with their friends and play as all children their age do.
I thank you for coming.  I thank you for listening and may God Bless the Federal Republic of Nigeria.