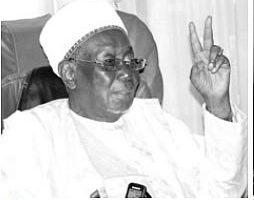 The 18th Sultan of Sokoto, Alhaji Ibrahim Dasuki is dead. He died on Monday evening at the Turkish Hospital in Abuja at the age of 93 after a protracted illness.

The news of his death was announced by Alhaji Mohammed Abdullahi on whatsupp wall of #IndependentHajjReporters. The story of his death was posted in Hausa language and said that the burial would take place in the Mosque of Sarki Musulumi Muhammadu Bello in Sokoto metropolis today, Tuesday.

Ibrahim Dasuki was born in Dogon Daji, Sokoto. He was the son of Haliru Ibn Barau who held the title of Sarkin Yamma and who was the district head of Dogon Daji. He started Quranic education in 1928. In 1931, he attended Dogondaji Elementary School before proceeding to Sokoto Middle School in 1935. He finished his secondary education at Barewa College on a sponsorship from Sokoto Native Authority. After finishing high school in 1943, he worked as a clerk in the treasury office of the Sokoto Native Authority as it was the tradition in Northern Nigeria for grant recipients to work for theier sponsors, their respective Native Authorities. However, in 1945, he took up appointment with Gaskiya Corporation, a publishing house that published theHausa daily, Gaskiya Tafi Kwabo. In 1953, heeding the call by Ahmadu Bello for Northern Nigeria citizens to take up appointment in the regional civil service, he joined the service as an executive officer. A year later he became private secretary to Ahmadu Bello. In 1957, he filled the position of regional executive council deputy secretary and a year later he was sent to Jeddah as Nigeria’s pilgrimage officer. Between 1960 and 1961, he worked in the Nigerian embassy in Khartoum, Sudan and was later brought back to Nigeria by Ahmadu Bello to work as resident in Jos, later on, he became the permanent secretary in the regional Ministry of Local Government. Dasuki later switched to the Ministry of Commerce in 1965 as its permanent secretary.

After the death of Abubakar Siddique, the 17th Sultan of Sokoto on November 1, 1988, Dasuki was among the leading centenders to become the new Sultan Some of his opponents included Shehu Malami and future Sultan, Muhammadu Maccido. Maccido was the son of Abubakar Siddique and he was popular among the populace in Sokoto, However, Dasuki was close to the administration of General Ibrahim Babangida. On December 6, 1988, he was announced as the new Sultan to the dismay of some in Sokoto. The announcement led to five days of rioting in which 10 people died. He was considered a modernist against the wishes of some who wanted the traditionalist candidate, Maccido. As Sultan, Dasuki tried to endear himself to the Sokoto populace. He built 10 Quaranic schools in 1990 and established an adult literacy class. Dasuki also tried to unite the Muslim ummah through the reorganization of Jama’atu Nasril Islam and the Nigerian Supreme Council of Islamic Affairs(NSCIA). He gave impetus to the appointment of Lateef Adegbite, who became the first Yoruba secretary general of NSCIA.

In 1996, Dasuki was called into the office of the military administrator of Sokoto, Yakubu Muazu and was told he was deposed as the Sultan. He was flown to Yola and then taken to Jalingo where he was placed in exile. Muazu gave some reasons for the banishment such as Dasuki was causing enmity among the people and among the royal family, ignoring government directives and traveling outside his domain without approval or notice from the government. However, some believe he was deposed because of personal issues between him and General Sani Abacha. Dasuki’s son in law, Aliyu Dasuki was a classmate of Sani Abacha and also his business partner. Aliyu died in 1992 and Ibrahim Dasuki handled his estate affairs after his death, Abacha was not comfortable with the management and disbursement of Aliyu’s estate. [myad]