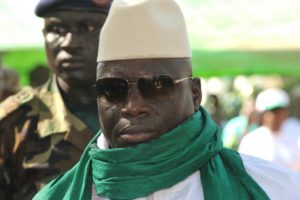 The President of Gambian, Yahya Jammeh has shocked the world by rejecting the result of presidential election held earlier this month, a week after conceded defeat to the opposition party.

Mr. Jammeh pronounced that he now rejected the results of the election “in totality.”

“After a thorough investigation, I have decided to reject the outcome of the recent election. I lament serious and unacceptable abnormalities which have reportedly transpired during the electoral process.

“I recommend fresh and transparent elections which will be officiated by a God-fearing and independent electoral commission.”

Jammeh, who came to power after a coup in 1994, cited “abnormalities” in the vote and called for fresh elections in which he was defeated by Adama Barrow.

Mr. Barrow, who won more than 43 percent of the vote, on the other hand, accused the incumbent of damaging democracy by refusing to accept result.

His transition team said the president-elect was safe even as International criticism of Mr. Jammeh came swiftly.

The results were revised by the country’s electoral commission on 5 December, when it emerged that the ballots for one area were added incorrectly, swelling Mr Barrow’s vote.

The error, which also added votes to the other candidates, “has not changed the status quo” of the result, the commission said.

However, it narrowed Mr. Barrow’s margin of victory from 9% to 4%.

Mr. Barrow’s spokesperson said the head of the army, General Ousman Badjie, supported the president-elect, having pledged his allegiance after the initial result.

Meanwhile, the US and the Gambia’s neighbour, Senegal, have condemned his announcement, even as the African Union called for a “peaceful and orderly transition of power.”

The US State Department Spokesman, Mark Toner, in a statement, said that his country “strongly condemned” Mr Jammeh’s rejection of the result.

“This action is a reprehensible and unacceptable breach of faith with the people of The Gambia and an egregious attempt to undermine a credible election process and remain in power illegitimately.”

The BBC’s West Africa correspondent, Thomas Fessy, says the main question now is whether the Gambian leader has managed to split the army, retaining a faction ready to back his announcement.

The government in Senegal called for an emergency meeting of the UN Security Council. Foreign Minister Mankeur Ndiaye, speaking on national television, asked President Jammeh to respect the election result.

“The international community, notably (regional bloc) ECOWAS and the African Union (AU), should loudly protest any unlawful attempt to subvert the will of the Gambian people,” said the deputy programme director, Babatunde Olugboji.

The streets of the capital, Banjul, were reported to be calm yesterday night although soldiers were seen placing sandbags in strategic locations across the city, AFP news agency reports.

“You are the elected president of The Gambia, and I wish you all the best. I have no ill will,” he said at the time.

Mr. Barrow, a property developer, is due to take office in late January.

The Gambia is the smallest country on mainland Africa, with a population of fewer than two million. In his 22 years in power, Mr. Jammeh acquired a reputation as a ruthless leader.

Ahead of the election, Human Rights Watch accused him of using violence to silence critics. The group said two activists had died in custody and dozens of people had been jailed and denied medical or legal help.

This was even as the speaker of the Nigerian House of Representatives, Yakubu Dogara called on ECOWAS leaders to stop President Jammeh from creating a scene of anarchy in the West African nation.

Dogara, in a statement by his Special Adviser on Media and Public Affairs, Mr. Turaki Hassan, called on leaders of the regional bloc of Economic Community of West African States to take all necessary measures to stop defeated President of Gambia from plunging the country into anarchy with his volte-face on the recently concluded elections.

“It is in this respect that Nigeria must lead efforts and where necessary intervene to stop the outgoing Gambian President, Yahya Jammeh, from reneging on his remarkable action in earlier accepting defeat.”

“There is no longer any place or space for tyranny and dictatorship on the African continent. The era of obtaining victory at elections by corrupting the process is gone and gone for good.

“The challenge before leaders in Africa is to take the people out of poverty which is a major threat to democracy and enthrone a just and prosperous society.” [myad]